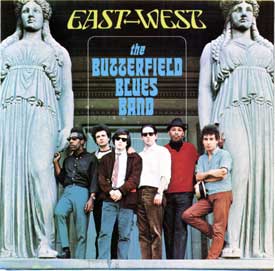 East-West stands as a cornerstone for the Paul Butterfield Blues Band’s just-announced induction into the Rock and Roll Hall of Fame.

That both things were wrapped up inside the Paul Butterfield Blues Band’s East-West, however, is undeniable — and, in the end, this 1966 triumph (recently given a badly needed remastering by Audio Fidelity) became a cornerstone for the group’s just-announced induction into the Rock and Roll Hall of Fame.

Butterfield, joined on this journey by guitarist Mike Bloomfield, second guitarist Elvin Bishop, bassist Jerome Arnold, keyboardist Mark Naftalin and drummer Billy Davenport, is captured in a dead run on the back cover of East-West — an indelible image both because of every mind-bending revelation found inside this Elektra recording, but also because of what we now know about the doomed harpist.

Dead at 44, Butterfield’s genius for stretching the typically staid genre of the blues was only matched by his appetite for destruction. And yet, before drugs and drink ruined him, Butterfield helped conceive this, put together a band to convey this, and then gave it to history.

As sad as Butterfield’s ultimate end remains, East-West opened doors not just for the blues, but all of rock. He stirred in raga and jazz, he led the others on searing flights of fancy, he played the harmonica with a fire and wit that drew favorable comparisons to Sonny Boy Williamson II and Little Walter Jacobs.

In no small way, rock and blues existed only before East-West and after East-West. This album kicked down the doors of convention, in particular with its Eastern influences and long-form jams, to a degree that both genres were absorbed in the aftershocks for years. Call that time, AEW.

Sadly, however, much of this brilliant artistry has long been buried in a woolen original mix, and even worse compact disc transfers. Butterfield’s achievements here, his striking interplay with Bloomfield, Naftalin and Bishop, all of them doing things that had never been done — and doing it with a fearless abandon — well, it’s never sounded better. Never more present, never more alive.

In the end, there’s no better path to understanding what Paul Butterfield meant, and why he’s now joining Joan Jett, Green Day and others in the rock hall. Audio Fidelity hasn’t just taken us back, it’s put us in the room as history is fashioned into something brand new.

By Nick DeRiso for SomethingElseReviews.com