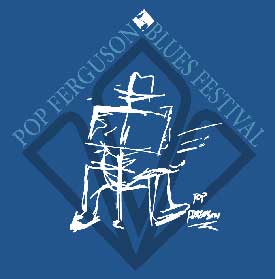 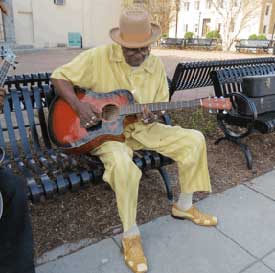 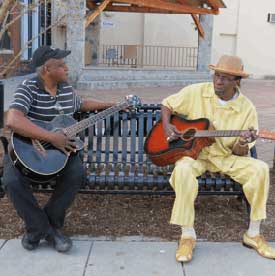 The festival is named after Pop Ferguson who was inducted into the U.S. Library of Congress and the Folkways Museum of the Smithsonian Institute six years ago. In 2015, he will be formally recognized during the opening of the new African-American museum in Washington, D.C.His son, Clyde, founded the Pop Ferguson Blues Heritage Festival six years ago and plays bass guitar with his dad.

The theme of this year’s event is “Roots, Branches and Stems.” Clyde Ferguson explained that blues music evolved into other genres, such as pop, hip hop, rock and roll, country, bluegrass and more. The festival is about the culture of blues music, its heritage and contribution to today’s popular sounds.

Wiggins has performed at Carnegie Hall, the Sydney Opera House, Royal Albert Hall, and the White House. He said he loves traditional blues, but does enjoy seeing younger performers breathe new life into it. He explained that a trend is to incorporate jazz and rock and roll into the blues sound.

The 2014 festival opens on Friday night with a free block party from 6-8 pm at the Martin Luther King Center, located at 313 Greenhaven Drive NE, in Lenoir. Jazz musician Bryan Anderson will perform.The party then moves several blocks away to The Alibi, a downtown restaurant and pub located at 915 West Ave., NW.  An open jam session will be held from 10 p.m. – midnight. The public is invited to bring guitars and jam with artists who will be performing on Saturday.

Additionally on Friday, a VIP meet and greet will be held and will include a special performance by Phil Wiggins. Tickets are $25 per person and can purchased by calling (828) 757-0783.

Events kick off on Saturday with free workshops from 9 a.m. – 12 noon at Highland Coffeehouse on 113 Main St., NW, in downtown.Wiggins will lead the session on how to play the blues harmonica. Instruments for participants have been donated by Hohner Harmonica.Bob Kogut will demonstrate how to play the blues violin. Kogut is from Lenoir and makes violins which are used by classical and bluegrass artists worldwide.

The street festival will be held from 2-10 pm, with heritage crafters, food vendors and musical performances.

Lenoir, recognized as the first home of the furniture market, is located between Hickory and Boone, North Carolina on U.S. 321. The city is recognized today as a hub for visual and performing artists. A variety of small and large pieces of sculpture provide photo opportunities along city streets. Inside downtown restaurants, bars and shops, walls form a backdrop for interesting and unusual paintings.

As a little boy, Pop Ferguson, who is now 86, listened to the blues music on the radio. He had an ear for picking up the tunes. So when he got his first guitar at the age of 10, he practiced the chords and tune to play popular songs of the era.

Later, he took his music to the streets of Lenoir and became a local celebrity. Today, the agile octogenarian captures audiences with his grace, style and sultry blues sound.