Rae Gordon Band :: BETTER THAN I WAS 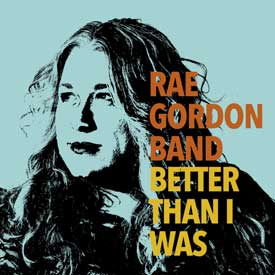 After a head-turning third-place finish in February 2017 at the International Blues Challenge – their set at the finals in Memphis’ Orpheum Theater “had the audience up on their feet stomping and clapping with appreciation,” (Blues Blast Magazine) – the Rae Gordon Band knew expectations would be high for their next CD. The previous releases, Blue Lemonade (2013) and Dirty Flowers (2015), were well-received and picked up some awards, but Rae and her band felt there was now extra pressure to deliver something worthy of all the buzz they’d built in Memphis.

“Our seven-piece band has this huge impact in a live setting,” Rae says. “The horns, the heavy-grooving rhythm section, the gritty guitar tone – together they just pack a punch that people really respond to. I felt like the challenge was to make a record that would let people feel that impact.” Gordon put her head together with musical director/keyboardist Pat McDougall, taking several of her raw lyrical and melody sketches and developing them into finished songs. The title song, “Better Than I Was,” reflects Rae’s own continuing journey of self-improvement and boasts guest appearances by renowned Portland soul singer LaRhonda Steele and Houston transplant Rich Layton on harmonica.

The album features six Gordon/McDougall compositions, three by McDougall including the rollicking roadhouse number “Standing On The Edge,” and closes with the Otis Redding classic “Dreams To Remember.” It was Rae’s arresting performance of “Dreams” at the International Blues Challenge that brought tears to the eyes of competition judge Walter Trout, who was so taken with Rae that he had her join him onstage for a song when he played in Portland a few weeks later. “The way people came out of their seats in Memphis for ‘Dreams To Remember,’ we just knew it needed to go on the record so everyone could have the same experience,” producer and guitarist Kivett Bednar recalls. “Between Rae’s incredible vocals and Scott Franklin’s killer sax solo, I feel like we nailed it.”

The initial response to Better Than I Was has been resoundingly positive; when the band launched the album with a crowd-pleasing set at Portland’s high-profile Waterfront Blues Festival, longtime and brand-new fans alike snapped up every copy on hand. An early favorite for many listeners is the uptempo cooker “Elbow Grease,” a callback to the sassy, female-driven, horn-punctuated soul records of yesteryear that fills the dance floor in a heartbeat. Other standout tunes include the funked-up and organ-spiced “I Don’t Believe You,” the jump blues of “Hurry Bone,” the lighthearted love-gone-nope of “You Coulda Fooled Me” and the minor-key torch ballad “Holding Back The Tears,” featuring a searing guitar solo from Kivett Bednar.

The Rae Gordon Band is currently playing dates in support of Better Than I Was, including the Waterfront Blues Festival, Winthrop Rhythm & Blues Festival, Bronze Blues & Brews Festival, Big Blues Bender and others. Rae Gordon is a three-time recipient of the Cascade Blues Association’s Muddy Award for Best Female Vocalist, and the band was recently named Best Blues Artist in a reader poll by Portland’s Willamette Week.

See her website for all upcoming shows and other band news.