RB Stone :: SOME CALL IT FREEDOM (some call it the blues) 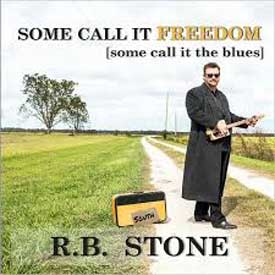 Written and produced by RB Stone, Some Call It Freedom (some call it the blues) on Middle Mountain Music, is his third blues/roots album and 17th project to date. It’s the follow up to the successful multi-charted, Blues Blast-nominated Loosen Up album he did with Tom Hambridge. It remained in the charts over 8 months. Like Loosen Up, Some Call It Freedom is an up tempo collection of 11 songs with a combination of several styles of blues with Stone’s stamp on it all.

Mississippi Hill Country and Delta Blues (power duo and trio formats) can be found in “Hill Country Stomp” (a nod to the legends and newer Hill Country artists), “Another Thief,” “You Don’t Want Me,” “Weapons of Mass Persuasion,” and “Nickajack.” “Nickajack” is a slice of Appalachia meets Mississippi Hill Country. The roots blues rockers (full band format) are “35 Miles to Mobile,” “YoYo Lover,” and the autobiographical “Won’t Stop Rockin,” take you back to a timeless classic sound with flavors of Cream and other groups of that era. There’s some good advice with a little New Orleans flair on “Mind Your Bizzness,” and album title, “Some Call it Freedom,” brings a cool J.J. Cale vibe to the project as Stone expresses life good or bad is all in your perception. The project ends on a strong note with a bluesy, jam-band, stylish tune; “Standin’ on Top of the World,” with all the players taking powerful, top shelf solos.