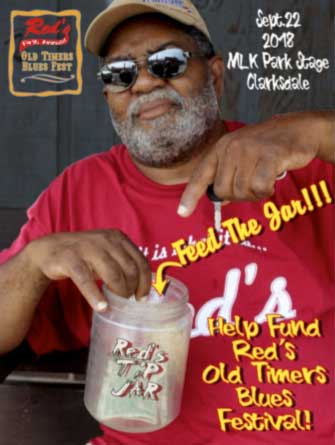 (CLARKSDALE, MS) — Internationally known from his appearances in TV shows like Anthony Bourdain’s Parts Unknown and blues documentaries like We Juke Up in Here, Clarksdale’s Red Paden has always viewed his place in blues history as part of a mission.

“Somebody’s got to keep this good blues music going, and somebody’s got to let the world know that there are still old legends walking this earth,” according to the man himself. “That’s why I’m starting this new festival. The game’s for life!”

The festival Red is fired up about? Red’s Old-Timers Blues Festival.

Red’s Old-Timers Blues Festival will specialize in Mississippi blues legends, 60 years old and up. On Saturday, September 22, 2018, attendees will enjoy FREE music all day on the Martin Luther King Park Stage, just down the street from Red’s Lounge in downtown Clarksdale. Red’s dream is to make this an annual event.

A LITTLE HISTORY ABOUT RED’S BLUES

Clarksdale, Mississippi’s self-proclaimed “King of the Juke Joint Runners” has been operating jukes for most of his life. Before his current, world-famous venue — Red’s Lounge — he had the Tin Top and, for a while, ran another late-night joint called Red Wine.

As the decades have passed by, he’s watched many musical friends move up to the big blues band in the sky. Today, even as he helps usher in a new generation of blues players, Red never forgets the blues heroes who came before and the handful of older players still among us.

Music fans who want to help Red in his latest mission donate at this GoFundMe page.

1.) Red Paden has been instrumental in Clarksdale’s blues-fueled tourism comeback and downtown revitalization. He books blues music four nights a week, year around — even during the slow times.

2.) Red’s Old-Timers Blues Festival will showcase the older, culturally-connected Mississippi blues legends while it still can.

3.) From the beginning, Red has stressed that this new fest needs to be free to attend and open to all. He has the backing of the City of Clarksdale and the Coahoma County Tourism Commission. Now, he just needs a successful GoFundMe campaign.

According to Red, questions about the festival can be emailed to his assistants Orlando Paden and Mac Crank.