Reminders of Katrina and Resilience 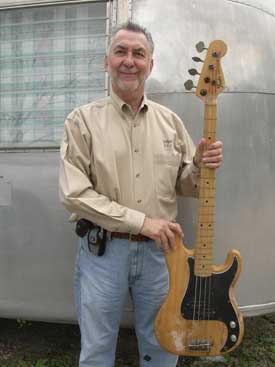 NEW ORLEANS, LA – “This P Bass was with me for years and I had it cleaned up in Houston, still worked,” says Gary Edwards, owner and producer of Sound of New Orleans Records. “I gave it to the son of a guy that was very nice to me when we were there. His son is doing well in the biz, working for Red Bull shows, whatever they do. This picture is from 2005 I think, sometime after Katrina. Things were so damned confused then that I am not sure. {I] sent the picture to Fender. They used it in their magazine and sent me a new case and a nice bass amp. I gave that away to Carl Marshall, great guitar and bass player, now living in Houston. He had been burglarized, lost lots of stuff. So, I gave him the amp [and] another Fender Jazz Bass that we had restored from the flood.”

Throughout his career, Edwards has remained deeply embedded in the New Orleans music scene. An early association with the New Orleans Jazz & Heritage Festival continued for nearly two decades as Edwards helped establish new stages for the rapidly growing event, but more importantly was given responsibility for the Festival’s series of music workshops with visiting musicians in local schools throughout the city. During the 1980s, he was stage manager for the world-renowned Blue Room nightclub of the Fairmont Hotel, a venue for touring national acts.

Following a series of gospel recordings in the early 1980s, Edwards began to recognize the international appeal of Louisiana music of all genres, which led to his exploring Cajun and zydeco music as well as local blues and R&B performers and, during the 1990s, the explosion of local brass bands blending old traditions with new sensibilities. Realizing he could record a wide variety of artists and that his label likely had a long future ahead of it, Edwards began construction of his own recording studio and offices in 1988, following a devastating fire that destroyed his previous office.

It was there that Edwards began creating the extraordinary series of recordings resulting in a catalogue of roughly 75 releases, 50 of them on CD, and still growing. Staying true to his original vision, selectively choosing acts to record and carefully producing each release, Edwards has vividly documented the richness of the New Orleans music tradition for more than 25 years. In the process, he has become a music-community resource, providing a platform for musicians who might otherwise go unheard while amassing a recorded collection of vernacular New Orleans and Louisiana Gulf Coast music unmatched by any label in the world.

Hurricane Katrina, which had been forecast to track northward along the U.S. Atlantic Coast before abruptly crossing the state of Florida and entering the Gulf of Mexico, took Gary Edwards, along with hundreds of thousands of other New Orleans residents, by surprise. Having very little time to prepare an evacuation, he threw some essentials in his van and relocated, along with his wife, Jennifer, to the greater Houston area. Behind, he left studio and offices eventually submerged under ten feet of floodwaters, destroying all equipment, files, and master tapes. A recently completed project with zydeco rising star Dwayne Dopsie, was completely destroyed.

Upon relocating, Edwards set out to do what he knows best, make recordings, book musicians, and help out where possible. To assuage his own sense of grief, and fearing he would never again have the opportunity to record authentic New Orleans gospel music, Edwards set about collecting the best and most moving tracks from his own gospel catalogue, releasing a CD called Gospel Favorites. At the same time, he made arrangements with Dwayne Dopsie and his band to use a Houston recording studio and re-create their lost release track-by-track, resulting in Traveling Man. He also made contributions to local New Orleans churches and helped them restore or replace musical instruments.

Returning to New Orleans in spring 2009, Edwards enthusiastically began to write a new chapter in the Sound of New Orleans story. Working directly with label owner Patrick Frémeaux, he helped assemble a 2-CD tribute released by the prestigious French label Frémeaux and Associates, known for its excellent taste in American roots music. Sound of New Orleans, 1992-2005: The Story of the Independent New Orleans Jazz, Blues, Zydeco & Gospel Label represents the best overview so far of the entire range of music recorded by Gary Edwards over the past two decades. As label owner Patrick Frémeaux says, “All these titles, rescued from the flood, bear witness to the strength, resilience, and unquenchable spirit of the people of New Orleans.”

Like the city itself, the Sound of New Orleans label, which had triumphed in the face of adverse conditions, entered a new phase of post-disaster survival and success.

At the same time, Edwards also formed an alliance with industry veteran Tim Whitsett to make Sound of New Orleans tracks from more than 50 albums available as digital downloads — either as single tracks or whole albums – on Whitsett’s roots-music Web site LocoBop (www.LocoBop.com).

After that, it was back to the studio for Edwards and he began turning out in quick succession a series of soulful new CDs. Edwards also remains active in his role as New Orleans music ambassador, booking New Orleans-based acts in venues around the country and especially in Europe.