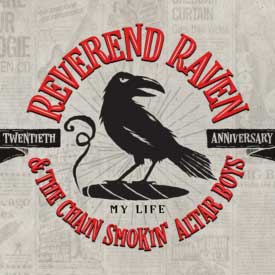 Simply titled My Life, the new studio album from Milwaukee institution, Reverend Raven & The Chain Smokin’ Altar Boys, celebrates 20 years as one of the nation’s hardest working road band. The quartet of blues veterans, led by Raven, have played every tavern, gin joint and cool club in the Mid-West and Florida and enjoyed just about most of them.

My Life, their eighth album, is a compilation of original songs from all four studio sessions remixed or re-recorded as a new version with a new lineup. The 16 tracks feature performances from Cadillac Pete Rahn, Madison Slim, Benny Rickun, Big Al Groth, Mickey Larson, Danny Moore and Westside Andy. The songs run the gamut of styles from traditional Chicago Blues, to swing, rhumba, roadhouse, delta and jump blues, all centered on Raven’s smooth-talking baritone, and tasty guitar work.

Choosing the best material from 20 years of work was certainly a daunting task as everything Raven and the Boys do is designed to burn up the dance floor. Several distinct masters of the blues harp stood proud as sidemen next to Raven through those years and so the collection begins by featuring Cadillac Pete Rahn on tracks 1 to 3 with him sparing on the cool blues “Handy Man,” the smooth rhumba “Bee Hive Baby,” and the jumpin’ “Creature Of Habit.” Madison Slim and his swirling style appears on one track “Bad Little Girls,” then Benny Rickun continues the formula for several more tracks including the autobiographical title track, which also sees Danny Moore joining in on barrelhouse piano. Big Al Groth steps in on sax for the boogaloo “Looking For Love,” and the double shuffle “Slow Burn.” Current Altar Boy, Westside Andy Linderman, burns on the final four tracks like the flat tire swing of “Someday When I am Dead and Gone,” then playing the foil to Raven’s dramatic hero on the slow blues “I Can Do You Right.”

The band’s bio accurately states: “Raven and the Altar boys play original songs peppered with nods to Slim Harpo, Little Walter, Jimmy Rogers, Junior Wells and the three Kings,” and in twenty years of sweat and tears they have turned their passion for the music into high art and a singular mission to spread the gospel of the blues.