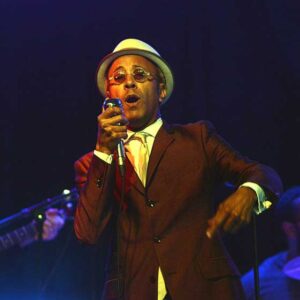 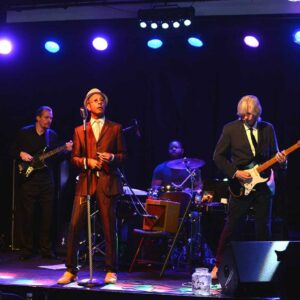 MEMPHIS, TN — With the son of Bobby “Blue” Bland onstage behind the drum kit many of the members of the audience in the Purple Haze must have been surprised to learn the lead singer was the one whose father was “Famous.”

“The MC Googled me,” “the Reverend” Shawn Amos said afterward. “I don’t keep a secret who my father is by any stretch but I also don’t advertise it.”

A Google search on Wikipedia for the son of chocolate chip cookie celebrity, Famous Amos, says nothing about Shawn Amos’ foray as a bluesman, a relatively new endeavor in a multifaceted career.

I met Amos and guitarist Chris Roberts at the Dallas Fort Worth Airport. We were on our way to the International Blues Challenge in Memphis. Amos and Roberts did not compete with the 250 bands and solo-duo artists at the 31st annual event. They played at a pair of promotion group Blind Raccoon showcases in Memphis, where industry people congregate during the IBC to scout new blues talent.

Amos was to be joined in Memphis with a rhythm section he had yet to meet, bassist Heine Andersen and drummer Rodd Bland. Andersen’s primary instrument is guitar, and he and wife Missy also performed together at the showcase.

The discovery of Bobby “Blue” Bland’s 1961 album Two Steps From The Blues was a musical game-changer for me, and I went to the Blind Raccoon showcase as much to see the son of an all-time great singer as I was to see the guys I met at the airport.

It was a mild and sunny winter day when I entered the Purple Haze just off Beale Street, and the reverend’s musical service was already in session. The band only had a chance to rehearse once, but it sounded tight. Roberts’ guitar tone was reminiscent of the one from the song the venue was named after. (Tip: if you want to befriend a guitarist, mention his musicianship and Jimi Hendrix in the same sentence.)

Dressed in a suit and fedora, Amos is a polished professional. He possesses a strong, clear voice and has good stage presence.

Rodd Bland at the drums clearly looks like his father, who died in 2013 and had a not-so-coincidental resemblance to the blues harpist James Cotton.

After the set I met Rodd Bland and he explained how he discovered Cotton to be his uncle. Cotton and Bland’s father had sat together after a show and Rodd Bland remarked how similar they appeared.

“Oh, I didn’t tell you?” the father said to his son. “James is my half-brother.”

Bland said he’s as much of a fan of rock music as he is of the blues. He plays Mondays and Thursdays with his band Mercury Boulevard on Beale Street’s 152 Club.

I asked him why he doesn’t sing? “I left that to my old man,” he said.

And on this day he left the singing to the Reverend Shawn Amos, who said he was pensive about playing for the first time in Memphis with an unknown rhythm section, but the outcome was solid.

“Rodd is so inventive as a player,” Amos said. “It was lovely to hear more complexity than you might traditionally get from a blues player but at the same time obviously he’s the son of a blues player. He doesn’t stray so far from the script that it becomes something else like fusion.

“Heine was super prepared. They got it. There are a lot of people who have heard my recordings but they haven’t seen it live and when they do all the pieces come together.”

Amos grew up in Hollywood in the entertainment business. Before the “Famous” cookies, Wally Amos worked for the William Morris Agency.

“He was an agent for Motown acts and Simon and Garfunkel,” Amos said. “He was the first black agent in the business. Then he was a personal manger to actors and comedians, and then he started Famous Amos in ’75, and that became who he was, who he is.”

Amos’ mother was a singer whose stage name was Shirlee May. She toured the Eastern Seaboard, performed with Dinah Washington, Cab Calloway and Sammy Davis Jr. and had a deal with a record company.

“She was groomed by Mercury but never reached the finish line,” said Amos, who in 2005 made an album honoring his mother and then stopped making his own music.

Amos said his earlier music was in the singer-songwriter style, but he has done many things, including working as an A & R executive who oversaw Solomon Burke’s last three albums and founding the digital content company Freshwire. He continues to work as a motivational speaker. Amos would be easy to Google, even if his dad wasn’t famous.

But in 2013, Amos began to consider making music again.

“As fate would have it, and old band mate of mine called me,” Amos said. “He said, ‘A bunch of us are going to go to Italy to play blues for this wealthy guy who owns a castle. Put a song list together of whatever you want to sing and it will be fun.’ ”

Amos headed to Italy with a saxophone and came back with a harmonica and a nickname.

“That’s where ‘The Reverend’ was born,” he said. “People didn’t know me, and for all they knew I was some seasoned blues guy. I (experienced a) combination of falling in love with these songs and seeing myself through these people’s eyes and feeling Solomon and people my father worked with. It was a collision of past, present and future and allowing myself to let myself go in a way I maybe had been too self-conscious to do so otherwise. I just sort of snapped in the best of ways. By the end of a week, my guitar player said, ‘You’re are like a reverend. You’re the Reverend Shawn Amos. When I got back I found my calling. I put a band together and made a record.”

The six-song EP. The Reverend Shawn Amos Tells It has four classic blues songs and two originals, including “Sometimes I Wonder,” a heartfelt track which alerts the world the singer is no blues dilettante. An album full of originals is in the works.

Amos is a regular onstage at Mr. C Beverly Hills where blues is a novelty. His appearances in Memphis were his first in front of an exclusive group of blues fans.

“It was like a reconnaissance mission,” he said. “I had no expectations other than I just wanted to be a part of the community and see how they responded to me. I wanted to see where I sat with other people out there. All of that felt validated. People received it well and got it. It felt like taking the first step of making a relationship with those folks.”

Amen to that, Reverend Shawn “the already famous” Amos.