Rick Vito :: MOJO ON MY SIDE 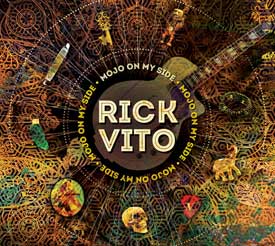 Few musicians in recent decades can lay claim to the caliber of credits held by Grammy-nominated guitarist, Rick Vito. His stellar slide and lead guitar work has enriched the recordings and performances of such legendary Rock and Roll Hall of Fame rock and blues artists as Bonnie Raitt, John Mayall and the Bluesbreakers, John Fogerty, Bob Seger, Jackson Browne, Roy Orbison, Rita Coolidge, Maria Muldaur, and scores of others. To date he has appeared on over one hundred released recordings, and his haunting slide solo on Seger’s “Like a Rock,” has been heard by millions as the guitar voice on the Chevrolet truck TV commercial ads over a ten year period.

Perhaps best known as a member of the legendary supergroup Fleetwood Mac (1987-1991), Rick brought back a passionate, bluesy quality to the band’s music. His original songs and vocal performances are featured on their albums, Behind the Mask, and The Chain. He also appears on the band’s Greatest Hits, The Very Best of Fleetwood Mac CDs, and the live concert DVD, Tango in the Night.

Rick’s debut solo album, King of Hearts, released in 1992 on Atlantic Records, was praised in Guitar Player magazine for its “…dazzling collection of fiery slide guitar driven songs.” His voice and guitar were again captured at their finest in his second solo work, 1998’s Pink & Black, this time in a more traditional blues-rock setting, which also highlighted the magical B-3 stylings of Reese Wynans, formerly of SRV & Double Trouble. Rick’s solo career continued to ascend over the course of the next decade with numerous critically acclaimed releases, including Lucky Devils, Crazy Cool, Band Box Boogie, Rattlesnake Shake and Talk That Talk, as well as a string of highly successful tours in Europe.

Along with his solo projects, in 2008 Rick teamed again with legendary drummer Mick Fleetwood to form both the blues-rocking Mick Fleetwood Blues Band featuring Rick Vito, and Maui’s Island Rumours Band, which features some of Hawaii’s most incredible traditional and contemporary musicians. In 2009-2010, Blue Again, the live DVD from the Mick Fleetwood Blues Band was released and shortly thereafter, Rick was honored by being nominated for a 2010 Grammy Award in the “Best Traditional Blues” category as both artist and producer. Also released in the same year was Lucky in Love: The Best of Rick Vito, a solid overview collection of Rick’s finest recordings to date.

With Mojo on My Side, Delta Groove proudly presents Rick Vito’s latest endeavor, which marvelously illustrates his distinctly singular approach to roots music, along with his trademark blues-infused slide guitar. Rick skillfully blends traditional blues, rock ‘n’ roll and R&B with modern sensibilities and consummate musicianship that’s sure to please even the most discerning listeners. If your ears have yet to fall under the spell of Rick’s musical enchantment, then prepare yourself as you get ready to reach inside his latest magical charm bag… ‘cause he’s got his mojo workin’ and it’s definitely gonna work on you!