Roadside oddities: Dockery Farms & the birth of the blues 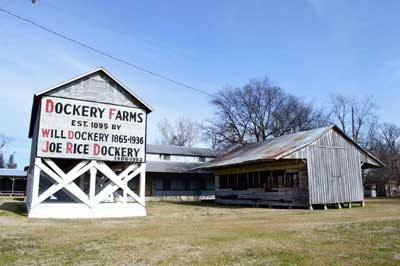 CLEVELAND, MS – B.B. King said it all started at Dockery Farms – the blues, that is. And he would probably know, being one of the most revered blues musicians of all time.

The blues is quite possibly America’s most distinctive musical style and many of its most iconic practitioners worked and lived in and around this cotton plantation, including Charley Patton, Robert Johnson, Howlin’ Wolf and Son House. Their music has been immensely influential on popular culture, particularly on rock n’ roll, with legends like Led Zeppelin, Eric Clapton, the Rolling Stones and, most recently, the White Stripes, covering their songs.

Will Dockery established the plantation in 1895 and quickly prospered, in part because unlike most Mississippi Delta plantation owners, he provided relatively fair wages and ethical treatment to his laborers. It is this reputation that brought so many of the Delta’s best musicians to this one location.

It has been a long time since any cotton was produced at Dockery Farms. All that remains of the once massive farm is a six-acre roadside tract just east of Cleveland, MS. Now on the National Register of Historic Places and part of the Mississippi Blues Trail, the site is maintained by the Dockery Farms Foundation and a grant from the National Park Service.

Dockery Farms can be visited free of admission. Several original buildings still stand, including the gin house and several outbuildings. Located a few miles off of the legendary Highway 61 and just two hours south of Memphis, TN, a stroll around the grounds is well worth the stop for anyone interested in American musical and cultural history.

Dockery Farms is located at 255 MS-8, Cleveland, MS 38732. You can get more information via the Dockery Farms Foundation or the Mississippi Blues Trail websites.