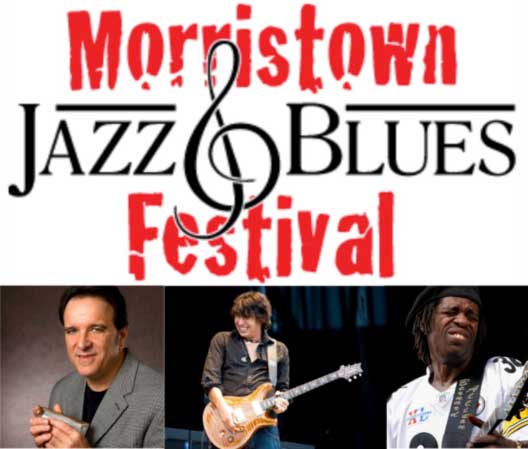 (MORRISTOWN, NJ) – Rob Paparozzi says that when it was suggested that he perform a 50th anniversary tribute to the Woodstock Festival at the free, all-day Morristown Jazz and Blues Festival, Aug 17, he responded: “Woodstock wasn’t really blues or jazz, per se. But I can make it work.”

The free all-day music festival on the Morristown Green Saturday Aug 17 is from noon-10pm. They will be saluting the 40th anniversary of public radio station WBGO. The music begins with the Antoinette Montague Experience followed by The Frank Vignola Trio and then at 4pm, Paparozzi’s Juke Joint with their salute to the 50th anniversary of Woodstock. At 6pm, it’s blues with The Bernard Allison Group followed by guitarist Davy Knowles at 8pm.

The Paul Butterfield Blues Band performed at the Aug 15-17, 1969 Woodstock Festival, for instance, and in 2014, Paparozzi and saxman/big band leader Ed Palermo collaborated on Electric Butter, an album paying tribute to both Butterfield and Electric Flag. Paparozzi, a harmonica player and singer, still plays some Butterfield songs regularly. He also fronted Blood, Sweat & Tears from 2005 to 2011; the jazz-rock band had its biggest hits in 1969 and 1970, and performed at Woodstock.

Bring your lawn chairs or blankets for the Morristown Jazz and Blues Fest and enjoy all that Morristown has to offer. The Festival has been made possible by a long list of sponsors and we could never thank them enough.