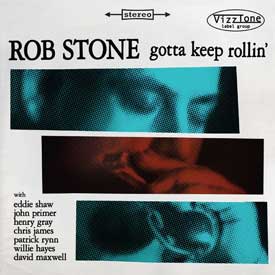 Deeply rooted in traditional Chicago blues, yet delivering high-energy house-rocking performances with a thoroughly contemporary impact, Rob Stone is one of the busiest young bandleaders on the blues scene today — a vibrant singer and harmonica player, boasting his own distinctive sound and a repertoire loaded with terrific original songs. From start to finish, Gotta Keep Rollin’ dishes up hard-driving electric ensemble blues that’s a nod to the genre’s glory days as well as a contemporary breath of fresh air– genuine blues unsurpassed in energy, feeling, and authenticity with blasting harmonica and cool, streetwise vocals.

Stone started his career in Boston and Colorado, before moving to Chicago in 1993 to join the band of legendary blues drummer Sam Lay. Touring internationally with Lay’s band for four years introduced Stone to blues fans worldwide. Rob and Sam continued to perform and record together over the years. “I have worked with many harmonica players, and he turned out to be the best. That cat is a monster harmonica player and musician!” said Sam (high praise from the drummer for Paul Butterfield’s vaunted mid-‘60s band, Howlin’ Wolf and Little Walter.)

Rob’s previous albums have been well received by fans and critics. His 2010 Earwig CD, Back Around Here, soared high on the blues charts for months and was named by Living Blues magazine as one of the year’s top CDs. It was preceded by 1998’s No Worries and 2003’s Just My Luck, which was nominated for a Chicago Music Award in the Best Blues Album category. Stone was also featured prominently in the Martin Scorsese-produced “Godfathers and Sons” episode of The Blues series that aired on PBS stations nationwide in 2003. Rob has opened for headliners as varied as B.B. King, Sheryl Crow, Robert Cray, James Cotton, Los Lobos and the late Etta James, and performed and/or recorded with a dazzling array of blues giants. Stone has done his mentors proud, tirelessly leading his crew across the U.S. and around the world. Rob frequently tours Japan, where he’s built quite a devoted following, and he has also barnstormed Europe.

But no matter who he stands beside on the bandstand, Stone’s hard-hitting, honest, highly danceable blues never fails to delight everyone from aficionados to neophytes. He remains strongly committed to blues tradition, but Rob is clearly his own man, a vibrant singer and instrumentalist boasting his own very distinctive sound and a repertoire loaded with terrific original songs. From start to finish, Gotta Keep Rollin’ dishes up hard-driving electric ensemble blues that’s a nod to the genre’s glory days as well as a contemporary breath of fresh air— genuine blues unsurpassed in energy, feeling, and authenticity.

Howard and the White Boys :: ROSA’S LOUNGE Marcia Ball :: THE TATTOOED LADY AND THE ALLIGATOR MAN