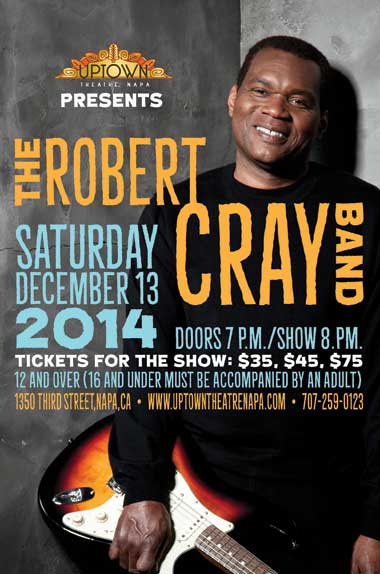 NAPA, CA – With 5 Grammy Awards, 15 nominations, millions of record sales worldwide, and thousands of sold out performances, rock blues icon Robert Cray is considered “one of the greatest guitarists of his generation.”  The Robert Cray Band will be performing at Uptown Theatre in Downtown Napa on Saturday, December 13th for Blues, soul and rock fans alike.

Cray has gone on to record sixteen Billboard charting studio albums and has written or performed with everyone from Eric Clapton to Stevie Ray Vaughan, and Bonnie Raitt to John Lee Hooker.  Inducted into the Blues Hall of Fame in 2011 at the age of 57, he is one of the youngest living legends to receive the prestigious honor. And while he can look back over an astonishing four-decade career punctuated by his trademark sound and distinct playing style, Robert Cray is too busy moving forward on an amazing journey with his seventeenth studio album IN MY SOUL, released in April of 2014 and embarking on yet another world tour with the Robert Cray Band.