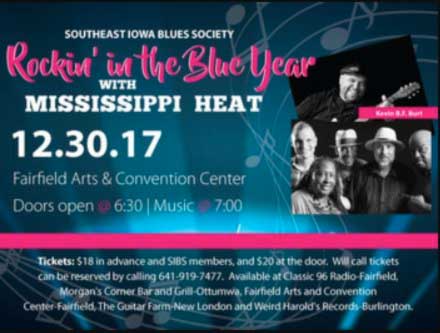 Mississippi Heat’s name is a reflection of Pierre’s reverence for Mississippi’s blues culture and music. The band’s conviction is that there is no deeper music than Delta-inspired blues to express what lies in everyone’s soul. They have received world-wide critical acclaim, including from Living Blues Magazine: “Mississippi Heat delivers its traditional urban blues with a freshness, energy and competence that makes them a treasure on today’s Chicago scene.”

Opening the night of blues is Kevin “BF” Burt, the recent winner of the Iowa Single/Duo Blues Challenge. Kevin has been writing and playing Blues music for over two decades in the US and Europe, his audiences are always amazed at the incredible music one blues man can create by himself.  His soulful voice combined with his creative blues licks are not to be missed.