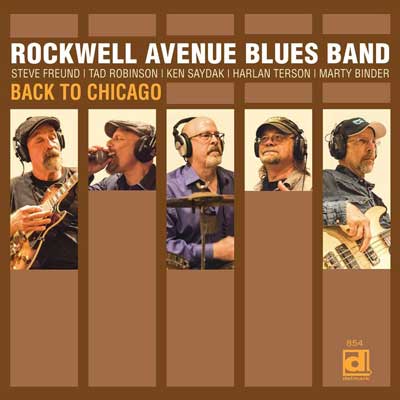 The members of the Rockwell Avenue Blues Band have each achieved successes over long parallel careers, but there was some unfinished business to attend to. Longtime bonds, which sometimes elude conscious recognition, drew them to Delmark’s Riverside Studio on Chicago’s North Rockwell Avenue in October of 2017. It was a joyous musical and artistic reunion. Tad Robinson, Steve Freund and Ken Saydak had all recorded for Delmark over the past decades. Now it was time to join together again, as equals who had shared a lifestyle and craft, each in his own way, each with his own voice. So they took a week away from their routines to share a brief moment, frozen in time on Back To Chicago.

“This CD reflects exactly how we sound live,” exclaimed the band. “We have been working together in different incarnations for over 40 years and we bring several American Roots styles together that will appeal to the most discerning listener!” Part of the “last of the golden age” of Chicago blues, they say “we learned from the originators.” The album was recorded in Oct 2017 and produced by Dick Shurman.

It was Ken Saydak who was most responsible for the making of Back To Chicago. It was his concept to bring these players together in his native Chicago for a bit of a reunion. Ken has enjoyed a more than 40-year career as a musician, writer, vocalist and producer. He is the pianist, organist an accordionist on over 60 albums. He’s been a sideman to countless hardcore Chicago artists, most notably Johnny Winter, whom he recorded four albums with.

Guitarist, producer and band leader Steve Freund found his way to Chicago from New York after falling in love with the blues. Freund has been praised by Rolling Stone magazine for his “masterful, no-nonsense guitar work.” Steve won a Grammy or his appearance on Koko Taylor’s Blues Explosion album and among his own albums and work with Dave Spector, he has also appeared on over 50 albums as a sideman.

Soulful singer, harmonica man Tad Robinson is another native of New York who ended up in Chicago drawn in by the blues. By the late 80s Tad hosted the pro-jam night at the than new Rosa’s Lounge and made a lot of professional connections there. He debuted on Delmark in ’94 with Dave Spector whom he had hooked up with in the early 90s and then followed with his own albums. Tad’s enjoyed a string of successful albums on the Severn label and has been nominated for Blue Music Awards.