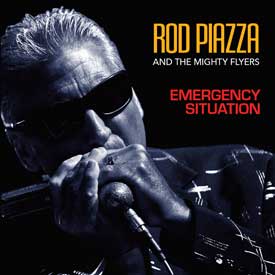 Rod Piazza and the Mighty Flyers, have long been regarded as one of the best and most entertaining blues bands around. The release of Emergency Situation marks a reunion between Blind Pig Records and Rod – in 2004 Blind Pig released the CD Keepin’ It Real and the following year the label put out a high-definition full length concert video entitled Big Blues Party.

Combining some smoking original tracks with obscure gems from R&B masters like Lee Dorsey, Jimmie Rogers, James Wee Willie Wayne and Amos Milburn, Rod and the Flyers amply demonstrate on Emergency Situation why they have risen to their position in the top ranks of blues acts. They’ve won numerous honors (including four Blues Music Awards for “Band of the Year” and thirty-three BMA nominations), played literally thousands of gigs around the world, recorded over a dozen highly acclaimed releases, and along the way virtually created a new style of blues – a combination of low-down Chicago grit, suave West Coast swing and jazz, and the rhythmic drive of the best early R&B and rock & roll.

“A dandy mix of cry-in-your-beer and rollicking blues-chasers.  The clincher: While the lads’ approach is based in the dark-of-night Chicago school, there’s substantial presence of jump blues, N’awlins R&B, and the suave, cooler, more good-timey horn-inflected West Coast blues. Harmonica fans, take note – the flame of Litttle Walter, James Cotton, Paul Butterfield, etc. is in such good hands. In these troubled times, Situation is a tonic.”  – Icon Monthly

In addition to the band awards, Rod has won the Blues Music Award for “Best Instrumentalist – Harmonica” while his wife Honey, a highly acclaimed musician in her own right, was named winner of the prestigious “Pinetop Perkins Piano Player of the Year” BMA.

Rod and Honey have consistently surrounded themselves with players who epitomize the very best in blues: fresh, swinging, tasteful, exciting and creative. Quite simply, Rod Piazza and The Mighty Flyers are one of the finest, most experienced, and most popular bands in blues today.