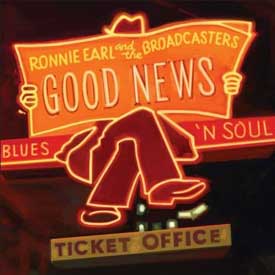 On Good News, Ronnie Earl is joined once again by The Broadcasters (Lorne Entress – drums, Dave Limina – keyboards and Jim Mouradian – bass), his band of over 25 years, to create a mostly instrumental CD of spellbinding intensity and deep soul that will add to his growing collection of landmark albums. Produced by Earl and recorded at Wellspring Sound in Acton Mass., Good News also includes special guest Diane Blue, whose captivatingly soulful vocals add further power to several of the tracks, as well as guitarists Nicholas Tabarias and Zach Zunis.

Good News is Earl’s eighth album for Stony Plain Records, and it clearly demonstrates, once again, the deep respect and knowledge he has for his peers and mentors. Along with a majority of original songs, Ronnie salutes several of his influences with loving interpretations of Sam Cooke’s “Change Is Gonna Come;” “Blues for Henry,” a tune co-written with the legendary Hubert Sumlin; and the Junior Wells composition, “In the Wee Hours.” The album’s closer, “Runnin’ in Peace,” features lyrics written by Ilana Katz Katz, who was near the finish line of the Boston Marathon when the first bomb exploded on April 15, 2013.

The new album’s title celebrates Sam Cooke’s album, Ain’t That Good News, released 50 years ago in 1964.  After having been arrested down South in 1963 he was inspired to write the song, “Change is Gonna Come,” which he recorded in 1964. He later appeared on The Tonight Show days before the Beatles were on The Ed Sullivan Show.  Cooke was shot and killed at the end of 1964, and the song “Change is Gonna Come,” became a rallying cry for the civil rights movement.

Ronnie Earl has been part of the music scene for many years. Deeply inspired by Muddy Waters, T-Bone Walker and Otis Rush, he started playing guitar in the mid-1970s. He formed his own band The Broadcasters in 1988. Along the way, he went on to tour the world with The Allman Brothers Band, Santana, and playing festivals with Ray Charles, B.B. King and Etta James.

“My greatest love in music is the blues; this is my ‘mother music,’” he says.  “And I dig deep — I have no choice; playing, for me, is a very emotional experience. I put every particle of my soul into it. I’m just trying to get into peoples’ souls and reach their humanity.”