Roy Rogers :: INTO THE WILD BLUE 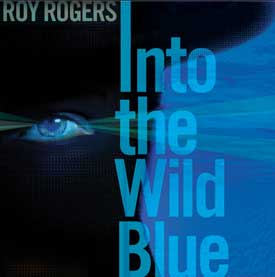 Roy Rogers remains defiantly upbeat on his 12th solo album Into The Wild Blue — out June 2nd on CD and all digital formats.

Even though 64 year-old Rogers has lost longtime friends like blues legend John Lee Hooker, his recent recording partner of eight years, Ray Manzarek of The Doors, as well as his younger brother Robert — he says “life’s too short” to wallow in our grief or what we have lost, “I want to celebrate life through my music.” Into The Wild Blue wails, squawks, stomps and boogies with authenticity — ready for the open road and the live stage. Years of working with the likes of John Lee Hooker, Bonnie Raitt, Carlos Santana, Sammy Hagar and Steve Miller has given him a pop musicality. “I’m the guy that always likes to push the envelope,” Rogers says, at home in Northern California. “We cover a lot of ground on this record.”

Into the Wild Blue launches right into a raucous slide guitar jam. It’s a positive take on the final fight in a relationship — the “Last Go – Around.” Blues credentials established, Rogers adds some funk to the beat and 60’s Motown female back-up vocal elements in “Got To Believe.” “I grew up when LPs first came out. You made a recording like a book, from start to finish,” he said. “I know that many people just buy individual tracks these days, but I approach recording like writing chapters in a book. The sequencing is important to me.”

Rogers worked on the lyrics and music for a year. The basic tracks of Into the Wild Blue were recorded in just four days, it was well rehearsed before going into the studio. “I’m old and new school in the studio. To me, technology should support the music, not be the music. Spontaneity is key,” said the rhythmic composer. Producing a record is so much about maintaining the vibe of the song’s original inspiration. “That can be hard to do,” he said. “You’re grabbed by any song usually in the first few seconds. The real excitement for me is when I know the song will work — then — the real work begins.”

The self-produced Into the Wild Blue sounds up-close, stripped down, and highly intimate. “I want the music to be right in your face, but with a little bit of an edge. I just want it to feel real to people when they hear it.” Rogers wails on his trademark custom doubleneck with a glass slide, or his vintage Martin with its DeArmond pickup, or his ’58 Les Paul. Steve Ehrmann is on bass, alongside drummer Kevin Hayes, with Jimmy Pugh on Hammond B3 organ. Virtuoso Carlos Reyes performed on the violin and stringed harp.

Losing a buddy like Manzarek, and then your brother, might make any songwriter embrace the dark side. “That’s not what the music is about, ”Rogers said. “Music, whether it’s blues or anything else is about singing your heart out and hopefully feeling better in the process. As John Lee Hooker said, “it’s all about the feeling.” The wistful, closing instrumental “Song for Robert (A Brother’s Lament)” comes from a place of acceptance, and while sometimes plaintive, it focuses on the overarching beauty and mystery of life. “It hopefully should be uplifting, and for me it is about remembering my brother – It’s my salute to him” Rogers said. Songs like “Dackin’’ and “High Steppin’” really capture the energy of Rogers’ live show. Rogers says he had no “master plan” for the 12th addition to his solo catalog. “It’s just putting one foot in front of the other.” Yet Into the Wild Blue demonstrates a master’s confidence and vision.

The Bloodline CD and Tour is coming Mr. Sipp :: THE MISSISSIPPI BLUES CHILD