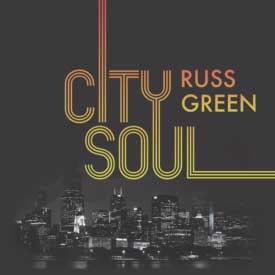 Russ Green’s debut album, City Soul, is a love letter to the Windy City and all the musicians who helped create its legendary sound. The ten original tracks, recorded at Rax Trax in Chicago by renowned engineer Rick Barnes, was co-produced by Russ and Sam Clayton and features a select group of the city’s hottest session players.

Green and his hot blues harp burn from the top of the boogie blues opener, “First Thing Smokin,” paying tribute to the sounds of Muddy Waters and John Lee Hooker and setting the tone for things to come. Green then works his soulful baritone like Bill Withers for the bittersweet “Believe In Love,” with drummer Ricky Nelson mixing in a touch of classic side stick playing into the groove. Green displays his affinity for Jimi Hendrix with the swirling psychedelic harmonica intro to the foxy funk rocker “The Edge.”

International troubadour Eric Bibb graced the sessions joining Green for a duet on his delta blues stomp, “Going Down South,” that was written as an exploration of the heritage of blues people. Joe Munroe lays down some super thick Hammond B3 sparing with Green’s harp on the south side strut ‘Lover Man.’

Green takes on the difficult social issues of poverty, homelessness, abuse and desperation that plague the inner city on the theatrical “Train Of Pain.” The slinky blues “Up From The Bottom” features some slick ice pickin’ guitar work from Giles Cory, and bass man Marvin Little leads the charge clearing the way for Green to tell the tale of a man down on his luck on the blazing chi-town funk, “Lint In My Pocket.” The crew pushes the envelope on the style shifting “Something New,” with Vince Agwada tossing some greasy slide guitar into the mix of modern blues rock.

The album closes with a classic R&B groover “Love To Give,” with Green trading off between a soulful vocal line and screaming blues harp, showing off the chops that are certain to win him new fans and satisfy his legion of loyal followers.