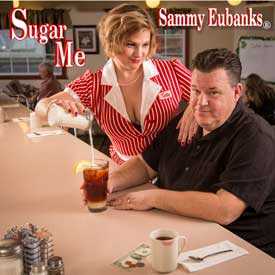 An icon of the Northwest music scene, Sammy Eubanks took his vaunted silver pipes and scorching guitar chops to Nashville, TN to record his fifth album, Sugar Me. What he calls his dream album, Sugar Me features three original works and seven covers that are brilliantly re-arranged. There he teamed up with fellow North Westerners Tim and Nancy Langford, owners of Underworld Records, and formed a music-city studio band affectionately known as “The Club Roar Players” – Matt Hauer, Darren Theriault, Chris Kimmerer, Bob Britt and the legendary SRV keyboardist Reese Wynans.

Sugar Me opens with a southern-fried blues rock track that lays out Sammy’s life story and musical philosophy by boldly declaring it’s “All Blues To Me.” The party kicks in with a sizzling take on the Skeeter Brandon & Highway 61 tune, “Stop That Grinnin’.” Eubanks then reveals the expanse of his influences by remaking “Blues All Mornin’,” from native American music trailblazers Indigenous, into a smooth soul dance track and transforming the blues classic “I Just Want To Make Love To You,” into a slide guitar driven foot stomper. Swirling keyboard sounds and a boogaloo beat spice up “’My Baby’s Gone,” and the title track “Sugar Me,” features lead guitar riffs as sweet as its name. Wynans delivers brilliant honky-tonk piano on the swinging “No Excuse For The Blues.” Eubanks has always had one foot in blues and the other in country music and he lays it all out for the beautiful Mark Collie ballad “Born To Love You,” a soaring track that will please fans on both sides of the fence. As a tribute to Nick Curran (R.I.P.), who suggested Sammy record this tune, Eubanks delivers a spot-on rendition of Bobby Blue Bland’s hit “It’s My Life, Baby,” (Robey/Washington) featuring more great piano from Reese Wynans. The album closer is fan favorite and dance-floor filler “I’m Gonna Leave You,” a raucous rocker with those signature Sammy Eubanks high notes and Stratocaster licks.

“Along the borderline between Country and Blues some genius arises. Delbert McClinton and Sammy Eubanks are in the same borderline genre,” says Robert Horn, former President of the Washington Blues Society.

Ever the skillful vocalist and guitar player, he is a mainstay on the Northwest music scene. Sammy travels as a trio with two veteran musicians of equal caliber and professional musicianship, Michael Hays on drums and vocals and David Nordstrom on bass and vocals, that make up the swingin’est rhythm section in the business.

In 1992 Sammy, along with his roommate and lifelong friend, Ted Todd (R.I.P.), and a small group of people, formed the Inland Empire Blues Society based in Spokane, WA. He and the band have won multiple awards and recognition including advancing to the semi-finals in Memphis at the 2013 International Blues Challenge. Since the end of the 90’s Sammy has won “Best Male Vocalist” three times from the Washington Blues Society and “Best Blues Performer” seven times from the Inland Empire Blues Society, and Riding Alone won IEBS’ “Best Blues Album” in 2011. He has self-released a total of four albums – Why In The World (1997), My Big Fat Blues Record (2005), Riding Alone (2011) and Live At Untapped (2013).