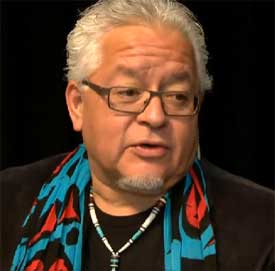 SASKATOON, SK, Canada – A Juno Award-winning blues musician is hoping his performances at Saskatoon schools introduce people to a rarely acknowledged aspect of music. Murray Porter is a Mohawk piano player from the Grand River Territory in southern Ontario.

He’s also one of the presenters of Blues in the Schools, a week-long program during the Saskatoon Blues Festival. The series uses music to educate students on topics like racism, classism and history.

The Mississippi Delta is often considered the birthplace of the blues. The songs of slaves later inspired rock n’ roll and other forms of popular music.

“The natives and the African American people, we all have a shared stake in this,” Porter said.

As black slaves escaped persecution via the Underground Railroad, they would often encounter Native Americans, and later, indigenous Canadians, according to Porter’s manager Elaine Bomberry, who is also First Nations.

“They went to our camps and to our villages and to our fires, and they were adopted in and there was a real cross-cultural exchange that happened between our two peoples,” Bomberry said.

Slaves often had their instruments taken away by their oppressors, Bomberry added. First Nations people would share their drums and they’d create music together.

On Tuesday, Porter and Bomberry presented in front of an auditorium of students at Tommy Douglas Collegiate. Porter’s nephew Michael Skye is a Grade 12 Tommy Douglas student. “It just kind of touched the heart, how native people, they really take in the blues and stuff. It’s amazing,” said Skye, a guitarist who often has jam sessions with his uncle.

Another artist, Tim Williams, will present at Saskatoon schools throughout the week.