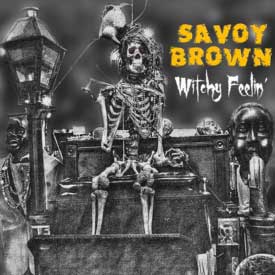 Veteran British blues band Savoy Brown’s Witchy Feelin’ on Ruf Records proves the Devil still has all the best tunes. Witchy Feelin’ promptly shot to #1 on Billboard Magazine‘s Blues chart and #1 on iTunes Blues “Top Albums.” From the thrillingly brittle guitar riff that opens “Why Did You Hoodoo Me,” we are in the hands of a master, with founding member Kim Simmonds reigniting the seismic vocals and searing fretwork that established Savoy Brown’s linchpins of the ’60s British blues boom. “On this album, I tried my best to get my voice in its power zone,” he explains. “I’m a baritone singer. I like listening to singers I can relate to, such as J.J. Cale, Mark Knopfler, Tony Joe White and Tom Rush. For my guitar playing, I still get inspiration from Otis Rush, Buddy Guy and all the Chicago players I grew up listening to back in ’63… but I always listen to new music too.”

Recording alongside Pat Desalvo (bass), Garnet Grimm (drums) and engineer Ben Elliott, Simmonds leads us into a world of dark nights, wild weather, women and whiskey: all perennial themes given a modern twist by this ageless bluesman. “The songs on this album have been two years in the making,” he reflects. “I tried to write songs that had a personal point of view yet can be relatable to everyone. On “Vintage Man,” I wrote about being the type of guy who doesn’t change as he gets older. I wrote about the power of love on “Why Did You Hoodoo Me.” And with “Guitar Slinger,” I wrote a song about seeing a great guitar player in an old country bar – as I did when I first saw Roy Buchanan in ’69.”

Blues is not for the faint-hearted. Since the genre first drew breath, its greatest practitioners have embraced the darkness, spinning tales of hardship and death, hellhounds and devilry. If the sleeve of Witchy Feelin’ suggests that Kim Simmonds, too, has a tendency towards the macabre, then Savoy Brown’s iconic leader is happy to confirm it. “Blues has always dealt with themes of the Devil, witchcraft and so forth, and I’ve always written along those lines. At least three of the songs on Witchy Feelin’ have that hoodoo vibe…”

Anyone who witnessed Savoy Brown leave the blocks in 1965 would speak of a similar epiphany. Back then, the band were the spark that ignited the blues-boom, signing to Decca, opening for Cream’s first London show and boasting a lead guitarist who was being name-dropped in the same reverential breath as peers like Clapton and Hendrix (with whom Simmonds jammed). Already, the guitarist was emerging as the band’s driving force. “I had a vision,” he reflects. “When I started the band back in 1965, the concept was to be a British version of a Chicago blues band. And the exciting thing now is, that vision is still alive.”

Soon, Savoy Brown had achieved what most British bands never did – success in America – and became a major US draw thanks to their high-energy material and tireless work ethic. “There’s far too much said about sex, drugs and rock ‘n’ roll,” Simmonds told Classic Rock. “It’s a cliché. We were all extremely hard-working guys. When we came over to America, we were like a little army. I look at that time as being filled with incredible talent.”

Times changed, of course, and by 1979, Simmonds had moved from a London he no longer recognized – “The punks were everywhere!” – to settle permanently in New York. The Savoy Brown bandmembers came and went, and the music scene shifted around him, but the guitarist stuck thrillingly to his guns and reaped the rewards, performing in iconic venues like Carnegie Hall and the Fillmore East and West, releasing thirty-odd albums, and later enjoying a well-deserved induction into Hollywood’s Rock Walk Of Fame.

Even in the post-millennium, while his peers grow soft and drift into semi-retirement, Simmonds retains a vision and an edge, spitting out acclaimed albums that include 2011’s Voodoo Moon, 2014’s Goin’ To The Delta, 2015’s The Devil To Pay – and the emphatic new addition to Savoy Brown’s catalogue, Witchy Feelin’. “I’m amazed that I still have the energy inside me to play guitar, create music and write songs,” he considers. “I’ve been blessed in my life and I thank God for that. I’ve never been a believer in holding on to the past – I don’t look over my shoulder and congratulate myself. I always want to climb the next mountain – and I’m very pleased with this new album…”