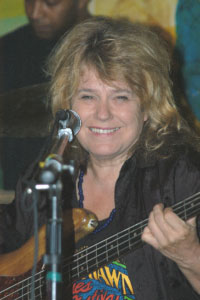 One of the few remaining juke joints outside of Mississippi is in Rentiesville, Oklahoma.

If you can imagine a Blues Hall of Fame in a juke joint then you are on your way to understanding(!) . . .and the Oklahoma Blues Hall of Fame (OBHOF) is happy to announce the recognition of  their 2006 inductee Selby Minner as a Music Legend. This last week the 15th Annual Bare Bones International Independent Film, Arts & Music Festival program proclaimed: Honorees – Music Legend 2014 – Selby Minner – Blueswoman, Artist & Founder Of The OK Blues Hall Of Fame

It went on to say, “Selby has worked tirelessly to develop the music community and spread the good word about Oklahoma Blues. From forming the Shady Lady Blues Band to becoming a co-founder of the Dusk til Dawn Blues Festival, Selby has had held her own in the International Blues scene for decades. Selby is headquartered in what was once a whiskey house operated by DC Minner’s grandmother Lura (from 1936 to 1968), in Rentiesville Oklahoma, a historically all Black town. Selby & DC Minner left years of traveling around the world to return to his birthplace to open the Down Home Blues Club (1988), then the Oklahoma Blues Hall of Fame (2004) and the 20+ years of the Dusk til Dawn Blues Festival (every Labor Day Weekend since 1991). The festival was started by this husband and wife musical team as a showcase of the region’s wealth of unknown blues talent. Since singer-guitarist-songwriter DC’s death in 2008, Selby and the non-profit Friends of Rentiesville Blues, Inc are continuing the legacy by keeping the festival alive and the blues alive. Whether teaching, performing solo guitar, or on bass and vocals fronting her band Blues On the Move – with newest addition Dan ‘Oklahoma Slim’ Ortiz on guitar – Selby demonstrates her prowess as the Blueswoman.”

There was a gala in Muskogee Sunday April 13th to close the two week Film Festival which presented some 300 indie films, bringing in film makers from across the region and further distances; California, Hawaii, New York, Puerto Rico, Canada, Australia, Germany, Paris France. Selby received her trophy and medal and was serenaded by two of the young blues players she has inspired and mentored.

MORE ABOUT THE FESTIVALS
Shiron and Oscar Ray’s festival was created by filmmakers, screenwriters and actors and created for filmmakers, screenwriters and actors who are involved in independent motion picture projects anywhere in the world. Named one of the “25 Festivals worth the entry fee” by Moviemaker Magazine and named one of the “20 best festivals for new and emerging filmmakers.” PBS included Bare Bones as one of the top 20 documentary festivals.  The Bare Bones Film Festival experience has long been touted as the “Friendliest Film Festival” by the many filmmakers who return year after year. Selby Minner is indeed honored to be chosen as their Music Legend 2014.

It is rated a “must-see to say you are in touch with blues in this country today” by the Blues Foundation, presenting music praised as the “best thing to come out of Oklahoma since oil” by fans! In 24 years it has put about $500,000.00  into the hands of worthy musicians for their performances.

RENTIESVILLE is on US 69 in eastern Oklahoma 2 exits north of I-40 or two exits south of Muskogee. The blues fest is 125 miles E of Oklahoma City and 70 miles SE of Tulsa; one hour west of Fort Smith, Arkansas.

Three days and nights, Three stages, indoors and out, 35 bands, over 200 musicians, workshops, a Kid’s Village, bar-b-que. We call it the ‘world’s largest back yard party’ and it is a fun time that attracts some 3,500 people to the historic rural Black Township Rentiesville.

The Blues Festival is the main event of the OBHOF, and we showcase 18 regional groups and 5 nationally acclaimed headliners. We are a family event with lots for kids to do throughout the three day music extravaganza. Plus the Juke Joint which goes after hours indoors (21 only)
Tickets are $15/day at the gate (about $1.50 a band!) KIDS under 12 FREE! Volunteers FREE!