Selwyn Birchwood is ready for his breakout close-up 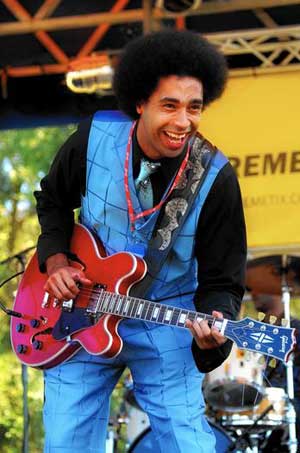 MIAMI, FL – Up-and-coming young blues guitarist Selwyn Birchwood laughs at the suggestion that he may soon need to start getting regular pedicures. Because, what, you’re too cool for that, Selwyn? That’s the point: You may get to be too cool not to.

Birchwood, born 29 years ago in Orlando, is the leader of an eponymous group that was named the best band at last year’s International Blues Challenge, an influential showcase held annually by the Blues Foundation in Memphis. At the same time, Birchwood won the Albert King Award as the IBC’s best guitarist.

The latter honor came with a prize, a Gibson ES-335 guitar, which Birchwood will play at his gig Friday night at Railroad Blues in Miami. The show will lean heavily on the Selwyn Birchwood Band’s new Alligator Records album, “Don’t Call No Ambulance,” an eclectic mix of flame-licked fret work, moody saxophone and warm, gravelly vocals that has created a stir among blues critics. The Washington Post calls Birchwood “an indelibly modern and original next-generation bluesman.”

“We were just trying to write the best tunes that we could. That’s all you can do, really,” the understated Birchwood says from Tampa, where he moved three years ago to get an MBA from the University of Tampa. “It’s very surreal, some of the reviews we got.”

The rest of the band includes baritone sax player Regi Oliver, Huff Wright on bass and Curtis Nutall on drums.

The name Selwyn Birchwood seems born for the marquee of a ramshackle club in a Spanish moss-draped Delta parish, but the road to blues acclaim was not so direct. His father is from Tobago, his mother from Britain, and a 13-year-old Birchwood first picked up a guitar to emulate Jimi Hendrix.

“It was the more obscure stuff that caught my attention. I really just wanted to understand where he came up with those ideas,” Birchwood says. “When you look back in his influences, there’s a ton of the old blues guys. Howlin’ Wolf and Muddy Waters, Lightning Hopkins and Elmore James. I found a sound that I had been kind of looking for.”

Birchwood is an engaging presence onstage, his angular 6-foot-3-inch frame a setting for stylish sartorial experimentation, from his halo of Afro-style hair to feet that often go uncovered. A telegenic young blues guitarist with contemporary fashion sense is not an unknown, and Birchwood says interviewers have dropped the name Gary Clark Jr., the 30-year-old, Austin-based Grammy winner who has been seen on the pages of Esquire and GQ.

Clark, Birchwood says, has been “a great gateway into the music” for new blues fans.

With a marketing degree from the University of Central Florida and his MBA, Birchwood knows how that game is played. But, while he does drive from Tampa to Orlando to get his Afro done to his specifications, he’s not planning on doing anything special with his feet, no matter how famous they might get.

And would he follow Clark as a model for John Varvatos?