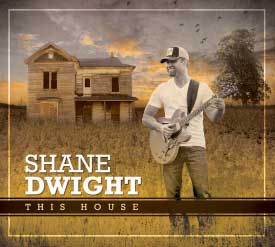 This House is the newest release from Shane Dwight, a leader in West Coast roots and blues.Native Californian Shane Dwight relocated to Nashville in 2009 to further advance his musical career. Within six months of arriving on the scene he swiftly attained a solid reputation as a “guitar slinger” in his newly adopted hometown. Not one to completely abandon his roots, Dwight still chooses to divide his time between Nashville and his childhood ranch in Morgan Hill, California. Performing over 200 shows per year worldwide, Dwight has shared the stage with some of the biggest names in music, including B.B. King, Etta James, Jimmie Vaughan, Taj Mahal, the Doobie Brothers, Los Lobos, Los Lonely Boys and Johnny Winter. Additionally, Dwight has performed at numerous prestigious music festivals and events around the world, counted among them the Portland Waterfront Blues Festival, Beale Street Music Festival, Ottawa Bluesfest, Bayfront Blues Festival, Bethlehem Musikfest, the Legendary Rhythm and Blues Cruise, as well as the Monterey Blues Festival where he was crowned winner of the “Battle of the Bands.”

With eight CDs and two “Live” DVDs under his belt, Dwight’s music has been played on hundreds of radio stations in over 40 different countries, earning him considerable praise and accolades along the way. in 2011, Dwight’s song “True Love’s Gone” from his album A Hundred White Lieswas selected by USA today writer Jerry Shriver for “Pick of the Week” column and the album charted on the Top 10 best-selling blues CD list on Amazon.com. The album also hit #3 on Sirius XM Satellite Radio’s Bluesville chart, debuted at #9 on the Living Blues Radio Chart, and was on the Top 40 “Roots Music” radio chart listings for over 6 months. A Hundred White Liesalso peaked at #9 on the “Route 66″ Americana music chart and remained on their Top 40 list for four straight months.

Building on the foundation set fourth by his previous critically-acclaimed release A Hundred White Lies, singer, songwriter anf guitarist Shane Dwight once again calls upon the expertise of Grammy Award-winning producer Kevin McKendree for his Eclecto Groove Records debut. This House finds Dwight retaining his blues-based roots, while also allowing for the influences of his current Nashville surroundings to seep into his music.Dwight is joined by special guest vocalist and co-writer Bekka Bramlett (daughter of Delaney and Bonnie) on two songs, along with a cast of Nashville’s finest, including rhythm guitarist Doug Lancio and drummer Kenneth Blevins (John Hiatt), as well as bassist Steve Mackey and drummer Lynn Williams (Delbery McClinton Band, Dick 50).