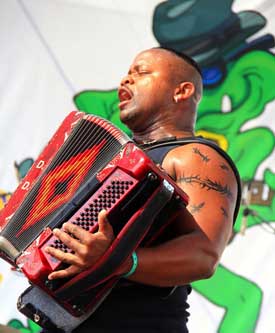 For the first time in the history of the festival, one band will cross over from the Cajun-Zydeco stage and also play the Blues stage. Dwayne Dopsie and his group the Zydeco Hellraisers will be the first performers to play both stages. They first appeared at the festival in 2014 and were such a hit that they were booked immediately to perform again, this time playing both stages on Saturday and again on the Cajun-Zydeco stage on Sunday.

Dwayne Dopsie and The Zydeco Hellraisers are so popular in their home state of Louisiana that LouisianaTravel.com ranks them #29 in their list of the “Top 100 Reasons To Visit Louisiana.”

The Yardbirds are more than a Rock band…they are an institution…they once included three of the greatest guitarists of all time! That would be Eric Clapton, Jeff Beck and Jimmy Page 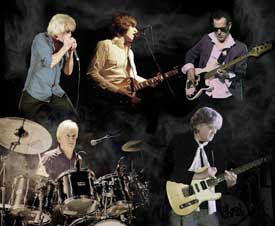 The Yardbirds are back with a new lineup, ready to rock. Founding member and drummer Jim McCarthy is the keeper of the flame, and he’s brought back The Yardbirds’ first guitarst, Top Topham. He was in the band before Clapton and had to leave because his parents didn’t approve of his career choice. Top was an art student and had to continue with his studies. But Top is now happy to leave his paintbrush at home and play the blues.

The 2015 version of The Yardbirds are still electrifying, eclectic and way ahead of their time while melding heavy rock, wild jams and an improvisatory feel that continues to influence generations of bands.

The Yardbirds are making their first appearance at the Simi Valley Cajun & Blues Festival and will be playing on the blues stage on Sunday, May 24th. www.theyardbirds.com 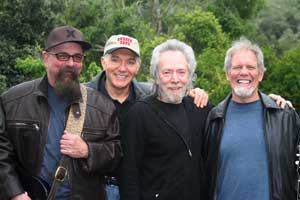 Emerging in 1966, Canned Heat was founded by blues historians and record collectors Alan

“Blind Owl” Wilson and Bob “The Bear” Hite. They gained international attention and secured their niche in the pages of rock ‘n roll history with their performances at the 1967 Monterey Pop Festival (along with Jimi Hendrix, Janis Joplin and The Who) and the headlining slot at the original Woodstock Festival.

Canned Heat’s unique blend of modern electric blues, rock and boogie has earned them a loyal following and influenced many aspiring guitarists and bands during the past 40 years. Their Top-40 country-blues-rock songs, “On the Road Again,” “Let’s Work Together,” and “Going up the Country,” became rock anthems throughout the world with the latter being adopted as the unofficial theme song for the film Woodstock and the “Woodstock Generation.”

Now, more than forty years later and with thirty-six albums to their credit, Canned Heat is still going strong. Anchored throughout by the steady hand of drummer/band leader Adolfo “Fito” de la Parra (a member since 1967) and with one of their strongest lineups ever, Canned Heat is well on track to carry the boogie-blues it made famous, well into the 21st century.

Canned Heat first appeared at the Simi Valley Cajun & Blues Music Festival in 2014 and by popular demand they are returning to play on the Blues stage on Saturday, May 23rd. www.cannedheatmusic.com

In addition to 8 hours of music, simultaneously on two stages, for two days, the Simi Valley Cajun & Blues Music Festival features a huge array of food choices from traditional barbecue, funnel cakes and kettle corn to Cajun-Creole food such as jambalaya, crawfish and alligator. And there are over 100 craft and merchandise booths to browse through.

Tickets are $25 per day at the gate for adults ages 13 and above (kids 12 and younger are free). Discount single day tickets are available on line for $20 and a two day pass for $35 is available only on line. www.simicajun.org