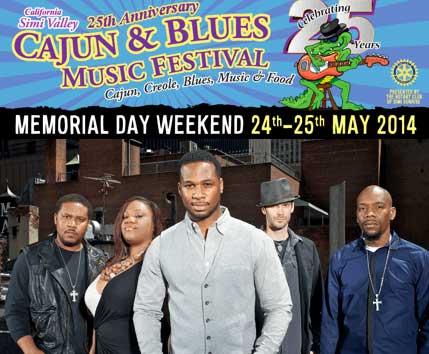 The 25th Annual Simi Valley Cajun & Blues Music Festival will be held on Saturday and Sunday of Memorial Day weekend, May 24th & 25th, 2014.

This week’s artist spotlight is on Robert Randolph & The Family Band who first gained national attention with the release of the album Live at the Wetlands in 2002. The band followed with three studio recordings over the next eight years which, together with tireless touring and unforgettable performances at such festivals as Bonnaroo, Austin City Limits, and the New Orleans Jazz and Heritage Festival, won them an expanding and passionate fan base. Randolph’s unprecedented prowess on his instrument garnered him a spot on Rolling Stone’s “100 Greatest Guitarists of All Time” list, and also attracted the attention of such giants as Eric Clapton and Carlos Santana, who have collaborated with him on stage and in the studio.

2014 promises to continue our tradition of bringing fans a full weekend of nonstop award-winning entertainment, more food choices than you can sample in two days, and activities to keep kids of all ages entertained too.

The Blues Stage will feature some of the most talented and renowned Blues & Roots acts in the world both Saturday and Sunday.

Both stages feature lots of viewing space plus large dance floors. In addition, this family friendly event has a giant kids area featuring bouncers, rock walls, specialty acts, crafts and talent shows.  There are also food booths and many crafts and merchandise booths.