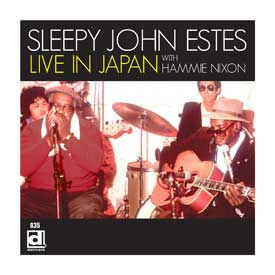 Live In Japan with Sleepy John Estes and Hammie Nixon was recorded in November of 1974 at concerts in Tokyo, Japan one of the very first tours of that country by a blues artist – preceded only by a B.B. King State Department appearance. The Estes tour was a great success and even resulted in an Estes track appearing on the Japanese Top 100 chart. This CD features spare, live material from the legendary Estes – and though recorded in the mid 70s, it wasn’t issued in the US until this year.

Tennessee blues poet Sleepy John Estes made his recorded debut in 1929 with the song “Broken Hearted, Ragged and Dirty Too.” In 1935 John teamed up with Hammie Nixon and they went on to record many classic sides together until WWII. After a twenty-year absence Delmark’s Bob Koester rediscovered John and presented him to the new blues audience in `62. This led to a series of LPs and a reinvigorated career.

On Live In Japan Estes plays his signature guitar and sings in a duo with harp player Nixon – who also sings a fair bit too, and creates this excellent back/forth energy – a very conversational approach to blues that’s also augmented by Nixon’s work on kazoo and jug! The core performance is the real highlight here – but the album also adds in an extra few tracks performed with a younger Japanese blues band, Yu Ka Don (sad song band), who bring a bit of electricity to the mix. Titles include “Tin Pan Alley,” “Divin Duck Blues,” (covered by artists like Taj Mahal and Johnny Winter), “Brownsville Blues,” “The Girl I Love She Got Long Curly Hair,” (covered by Led Zeppelin), “Stop That Thing”, “Potato Diggin’ Man,” and “Jesus On The Mainline.”