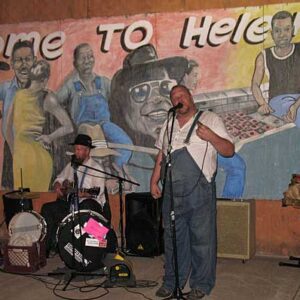 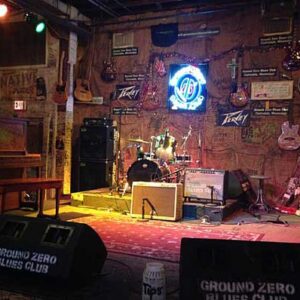 HELENA, AR- Helena, Arkansas is a pushpin on the map of the American South. Ninety miles south of Memphis and 360 miles north of New Orleans—straddling the Mississippi River—it scrapes out a Delta blues existence.

The 12,000 or so people who live there after a merger with West Helena a decade ago, earn about $26,568 a year, just half of the national average, according to the Census Bureau. The local school district and Wal-Mart WMT, -0.56% are the community’s largest employers, outside of agriculture.

And jobs are hard to come by.

The decaying downtown business district can’t give away redevelopment.

What Helena does have is the King Biscuit Blues Festival, which recently celebrated its 30th anniversary. The festival, named after a popular radio program, originated in Helena during World War II and promoted Delta music.

However, those Delta roots are blessing and curse for Helena and other small hamlets along US 61—the Blues Highway. Nearby Mississippi cities of Clarksdale, Indianola and Vicksburg and many others also lay claim to the music’s legacy.

And competition for blues bucks is not entirely cordial. One day in October, a Helena resident and King Biscuit volunteer looked south, and said of Clarksdale, “They have something we don’t: money.”

Clarksdale is the crossroads where guitarist Robert Johnson is mythologized as having sold his soul to the devil, in exchange for those jaw-dropping licks and harrowing lyrics—“blues fallin’ down like hail…there’s a hellhound on my trail.”

Actor Morgan Freeman and Clarksdale Mayor Bill Luckett opened the popular Ground Zero Blues Club in Clarksdale in 2001. Most nights, you can find something tasty there. The vibe is backed by a close-knit business community and the Delta Blues Museum. Street-corner buskers and juke joints create a rhythm Helena aches for.

The City of Clarksdale brings in about $10 million a year in revenue. That’s about twice what Helena does. And the state of Arkansas recently identified “material weaknesses” in Helena’s finances, documenting about three-quarters of a million dollars in misstatements; and “noncompliance with state law and accepted accounting practices” in the offices of the mayor, city clerk and treasurer.

Broadly speaking, blues music doesn’t appear to be all that lucrative even in the Delta.

The BB King Museum and Delta Interpretive Center in Indianola—which the wealthy Internet pioneer Jim Barksdale seeded with a generous contribution last decade (and whose wife Donna remains on the board)—lost almost $1 million in 2014. And it has lost money the last four years, according to federal filings.

Helena’s King Biscuit Blues Festival operates in (or near) the red, according to federal tax returns, while Clarksville’s Delta Blues Museum doesn’t generate enough revenue to file a comprehensive tax return. The survival of each seems heavily dependent on government and private grants.

Last June, moreover, Clarksdale spent $10,000 to become a host city for a new Rhythm and Blues Hall of Fame, only to see the project killed after the hall organizer and the city ostensibly had a misunderstanding over who would raise the funds and build the museum, the Clarksdale Press Register reported.

In the former land of cotton, the new extractive industry employing large numbers—and paying their bills—is casino gambling: a business worth more than $2 billion a year in Mississippi alone, according to the state Department of Revenue. Several casinos lie just off the Blues Highway, in nearby Tunica/Robinsonville, Mississippi.

You could say the blues is so down on its luck that the tradition is following the fated path of its own flatted notes and mournful lyrics.

Nationally, the soul-searing music is recognized more by the recent deaths of its architects — BB King, Johnny Winter, Bobby “Blue” Bland and Etta James — than by charted songs or albums

However—taking a gamble—the central Illinois harmonica maker Deak Harp moved to Clarksdale in 2013 to open his own storefront. It’s Deak’s Mississippi Saxophones and Blues Emporium, about a block from the Ground Zero Blues Club.

“Here, I get walk-in traffic, I get to meet more people—like James Cotton, Dan Aykroyd and more,” Harp told me.

Responding to the same blues-spawning spirit, the musician Johnny Cass—no, not Cash—of Sydney, Australia, told me that he recently bought a Clarksdale ice cream parlor, with plans to expand its menu and host live acoustic performances.

Moreover, the Ground Zero club might make money for the first time in 2015, according to Luckett. “I would like to become a mecca. The more attractions there are in the (Delta), the better the destination,” he told me. But of neighboring Blues Highway whistle stops, he is less hopeful, saying: “We just happen to be the catalyst that spawned a lot of these other places. Helena is about 20 years behind us.”

Linda Broome, King Biscuit Blues Festival executive director, said, “Being a lifelong [Helena] resident, I remember vividly going shopping with my mother downtown. There was not one vacant storefront and people were everywhere. For the past 30 years, a gradual decrease in the population has led to many shops going out of business. However, there is a spark here. It’s just going to take time.”

Inside a chain-link fence encircling a cash bar and VIP tent, thousands of predominantly white middle and upper middle class festivalgoers pay at least $30 a ticket. With one look, you see familiar faces: 50- and 60-year-olds who keep coming back year after year, even after the rain nearly washed away the money-losing festival and its drenched crowds the previous October.

In geography and demography, most blues enthusiasts present a stark contrast with the African-American faces and agricultural economy around this local government seat of Phillips County, Arkansas. More than one-third of the community lives in poverty, and the population is still falling.

As one relatively bright light, the Blues Foundation’s dues-paying membership has grown by one-third to 4,000 members over the last five years, and maintains about a $1 million reserve for the inevitable rainy day.

The Blues Foundation’s newly appointed president, Barbara Newman, traveled from Memphis to spend two days in Helena this past October, getting a feel for the festival and its fans.

Standing at stage right during the Taj Mahal performance on the festival’s final night, Newman told me, “For a tiny town in the Arkansas Delta to bring this many blues fans to its annual festival is a big statement about the blues.”

“That being said,” Newman continued, “we know that too many people do not understand what the blues really is all about. Part of our task at the Blues Foundation will be to educate our younger generation and other adults about this music form: both its history and how it has evolved.”

Near festival grounds, a restored train depot lays claim to the local Delta Cultural Center, and across the street is Bubba’s Blues Corner, which retails vintage Blues records, CDs and books.

And the American Queen Steamboat luxury cruises that ambles between New Orleans and Memphis tie up along the river below. A cruise brochure states, “For in through the dust and rubble, new life for this determined Southern town is emerging.” That might be a polite way of saying that Helena, like the blues music, faces a long road back.

I took a stroll down the midway. Neon signs promoted tamales, elephant ears and inflatable toys. It was impossible not to be distracted by so many lives of poverty, unemployment and marginalization. A block or two from the main stage, however, there was no music at all.

The locals might be feeling the blues. But they weren’t singing them.

There’s no money in it.

Story and photos by Michael Gauf, a former newspaper columnist and editorial page editor, who is a software application specialist and owner/artisan of Painted Axe, a small business specializing in custom painted guitars, and a blues enthusiast.