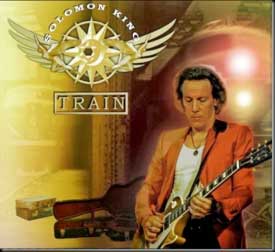 Solomon King’s third album, Train is a 9-song disc that “walks the line between love and lust, while celebrating getting on with one’s life,” says King, who performs lead vocals and most guitar parts on the record (noted L.A. session man Johann Frank also performs on the record). Train is a follow-up to 2011’s well-received disc, Medicine. King’s 2009 album Under The Sun was Grammy-nominated in the “Best Contemporary Blues Album” category and yielded two songs, “Jack Me Up” and “Frankie And Johnnie,” featured in the first season of hit HBO TV series, True Blood.

The album leads off with “Baby Does Me Good,” a rollicking blues-soul romp with King’s guitar lead reminiscent of George Thorogood’s ‘Who Do You Love.” King turns up the guitar heat in “Bad To Me,” while “Coffee Song” is a catchy little ditty that will leave you wanting more of it as much as we crave that second morning cup of java. “Slo Blues,” highlighted by some tasty King guitar work, lives up to its name and will have couples slow-dancing all over America; “Great Wall” relives the tried-and-true blues shuffle a la ‘King-style’; “Country Song” adds some serious twang to the proceedings; “My Baby’s Love,” with its soulful background singers, and slow rock refrain, will make the listener swear they’re listening to the second coming of the late Lou Reed. “Train,” the title track, with its memorable choppy guitar intro, finds King singing, once more in a vocal style eerily reminiscent of Reed. Closing out the album is the tender “Blue Angel,” showing a softer side to King that many artists hesitate to display.”

Solomon King is both a man and a band–the man sings and plays guitar in the band–and he does both with an extra measure of grit and soul. Train is King’s third release, after Buy The Medicine (2011) and Under The Sun (2009). On Train King writes all the songs. The band includes Johann Frank on additional guitars, Steven “Styxxx” Marshall on drums, Princeton Arnold on bass, Buddy Pierson on Hammond B-3, Nate Laguzza on additional drums and percussion, Jimmy Powers and Glenn Doll on harmonica, and a bunch of people contributing background vocals: Maxayn Lewis,  Connie Jackson, Gaby Teran and Jorge Costa.

After listening to Train I must once again put his music into a category for which the term brilliant is first and foremost…packed with truly great tunes from beginning to end. A really great album from one of the better singers, songwriters and guitarists performing nowadays. Highly recommended and thoroughly enjoyed.” ~ John Vermilyea/Bleus Underground

“Solomon King’s new release Train is the sign of an artist on his way up. This is his best music so far– with great singing, strong songwriting, and a selfless maturity–and yet I sense even bigger things ahead. The style reminds me of early Dire Straits or The Band circa Music From Big Pink, great music following an artistic vision all in service of each individual song.” ~ Bruce Edwards/Sunday Night Blues Project