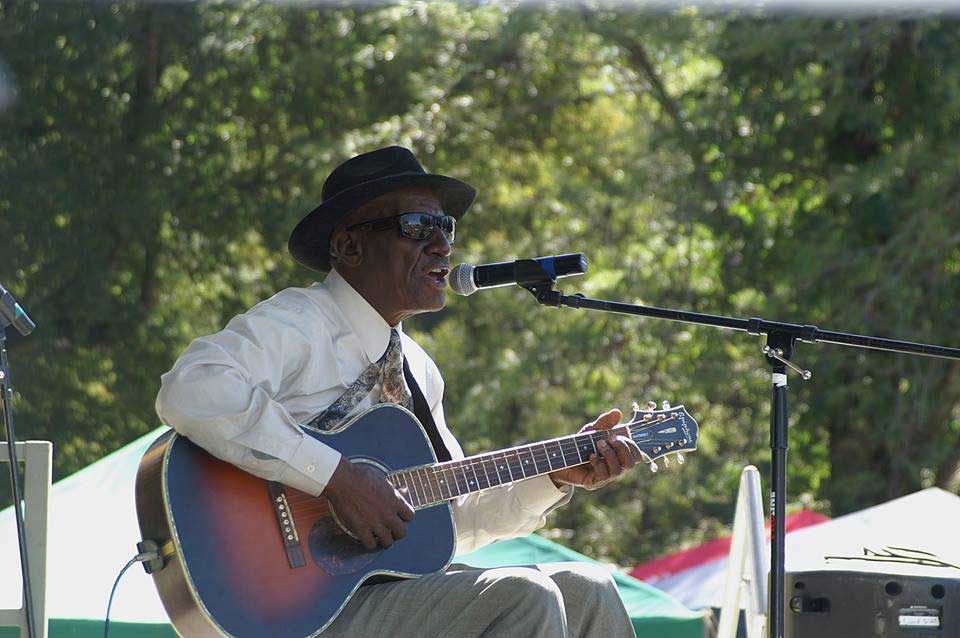 We made it to the festival [after a late start driving from Nevada and having to find refuge from a huge storm in Arkansas] and wanted to share a bit of info on a few of the amazing artists performing in Mississippi so far.

Jimmy ” Duck” Holmes was one of the highlights of the Highway 61 Blues Fest in Greenville, MS, Oct. 4, 2014, part of the Bridging the Blues. This is definitely a music filled weekend- two festivals – Mighty Mississippi Music Festival & the Highway 61 Blues Festival, Greenville, MS. The first day has been filled with musicians we have been anxiously awaiting to see perform. For those that don’t know Jimmy “Duck” Holmes (just one of the treats of the day) is one of the last musicians playing a unique, haunting country style of blues known as Bentonia Blues. He is also the proprietor of the Blue Front Café, Bentonia, MS one of the oldest operating juke joints. If you ever have a chance to see Jimmy “Duck” Holmes don’t pass it up.

Mickey Rogers another one of the Mississippi legends, performed at the Highway 61 Blues Fest, Rogers’ mentor and guitar teacher was Hubert Sumlin. He also was in the Tyrone Davis band for 16 yrs and has performed with numerous music legends. He commanded the stage with confidence and ease and showed us his versatility with his guitar playing and singing.

We’re also enjoying the food. You know you’re in the south when you’re sampling pork skins with some yummy sauce (this one was made by Ubons).

Dwayne Dopsie & The Zydeco Hellraisers provided us with a take no prisoners style of zydeco & blues music and made it clear they weren’t stopping until they had everyone dancing. The energy didn’t stop there and both Dwayne and Paul LaFleur (washboard) were caught in a frenzy of the music while playing as they laid on their backs. The audience screamed and at that point we were all caught in the frenzy.

Lightnin’ Malcolm (orange shirt) and headband) & Stud- (T-Model ford’s grandson) have joined forces and they are a force to be reckoned with as a two man band. High energy and they got the crowd up dancing.

We got a photo of Cadillac John (left) & LC Ulmer (right) after their performances visiting and swapping stories. It was treat to see both of them perform. Thanks to Billy Johnson and Randy McGee, Highway 61 Blues Museum for bringing so much talent to the festival.

Where would we be without the soundman? We met Tim McGugin who was at the board working sound at the Highway 61 Blues Festival stage. He got some help from volunteers; but, manned the sound booth both days as well as working with stage set up. He was definitely a man on a constant move. Thanks to Tim and all the soundmen that work the festivals.

10/6 Tom and I visited with Dion Brown, Director, B.B. King Museum and Delta Interpretive Center Indianola, MS, today. This is a must see for anyone visiting Mississippi.

10/ 7 Getting ready for the Biscuit!
Tom and I stopped by the King Biscuit Blues Festival office, 319 Phillips St., Helena, AR and the staff were getting ready for the festival that runs Oct. 8-11, 2014. It was great to see Linda, Jo and Joann all working hard to make sure we all have a great time. You need to stop by the office during the festival since they have some great merchandise (variety of must have souvenirs including some amazing t-shirts).

Hope to see you there.