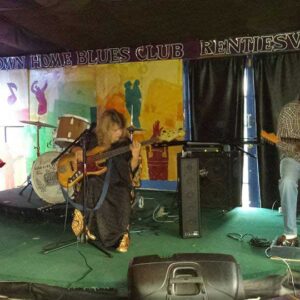 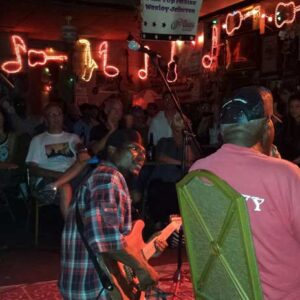 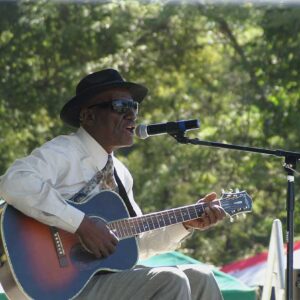 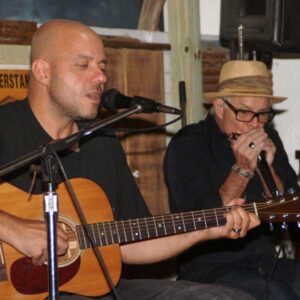 Cheryl & Tom Yearnshaw of the Blues Festival Guide, stopped in Rentiesville, Oklahoma on their way home from their amazing trip to the South. Once home they’ve had a chance to also reflect on their amazing experience.

“As we started to head home we stopped and stayed with our friends Selby Minner and Dan “Oklahoma Slim” (pictured) for a few days at the Down Home Blues Club in Rentiesville, OK. Rentiesville was founded as an all-Black town in 1903 and is one of the thirteen black towns left in Oklahoma (for more information go to http://struggleandhope.com/). The town is located approx. 22 miles south of Musgogee, OK. and has a total area of 1.7 miles. Across the street from the Club is the Honey Springs Battlefield. Honey Springs was Oklahoma’s largest Civil War engagement and is sometimes called the “Gettysburg of the West.” The Civil War battle was won by black soldiers.

The Down Home Blues Club started out as a corn whiskey house, juke joint and grocery store by D.C. Minner’s grandparents. D.C. was raised by his grandmother on this property and later became a well known blues artist with his band Blues On the Move. Eventually, Selby joined the band and they married and traveled extensively for several years. Selby and D.C. decided to settle down and returned to the family home and eventually converted the corn whiskey house to the Down Home Blues Club, a place where folks could listen and dance to live music and enjoy a drink. Approximately 24 years ago it gave birth to the Dusk ’til Dawn Blues Festival which happens every Labor Day. The Club is also the home of the Oklahoma Blues Hall of Fame. In addition, Selby and D.C. have taught children and adults over the years how to play the blues on the stage at the Club and received a Blues Education Award from the Blues Foundation. Although D.C. Minner passed away in 2008 his work continues.

The Down Home Blues Club is rich with blues history. The walls are covered in festival posters, pictures of past performers and Oklahoma Blues Hall Of Fame inductees, blues art and historical documents. And, if you listen very carefully on a quiet day you may just hear music resonating off the walls. Efforts have started to preserve the Club’s historical content and to add space for exhibits.

We have attended the Dusk ’til Dawn Festival a few times and the line-up is always impressive whether it is a headliner or a new comer. It has been deemed the largest backyard party since it is held on the farm’s five acres and it is a family atmosphere.

Oklahoma is the home of many blues musicians and we were able to sit and talk about Oklahoma blues history for hours. We also got to visit other existing historical Black towns.

It was time for us to go and before we left our hosts treated us to an early morning private performance. Although we said goodbye we will be returning at another time (for more information go to www.dcminnerblues.com).

Now that we’re home we’ve had time to reflect on the trip. This has been an amazing journey to the South and we thank everyone we met for their hospitality and also thank those that followed us on facebook and the e-Guide. We have met so many wonderful musicians and enjoyed their music. Although we have been mentioning highlights as we traveled we felt there were a few more to mention. We came across a picture of “Big A” Anthony Sherrod, an amazing young artist who is the real deal when it comes to the blues and a seasoned bluesman, and Cadillac John, playing together at Red’s Lounge, Clarksdale, MS. This was a touching moment we won’t forget. Another highlight was wandering through Stan Street’s Hambone Gallery in Clarksdale and getting to meet Stan. In addition to being a wonderful artist, Stan is also a versatile musician with his own band. We were able to hear him play guitar and harmonica. Meeting and talking with Robert Slim, Leo Gabriels and his wife Petka with Blues Magazine, Netherlands about their passion for the blues was a treat. We also got to see Jimmy “Duck” Holmes perform at the Highway 61 Blues Festival and later visited him at the Blue Front Cafe in Bentonia, MS. Everyone we met whether it was a fan, promoter, musician, etc. had one thing in common and that is a willingness to share their love of the music.

See ya on the blues highway,

NOTE: You can find many more back stories of Cheryl and Tom’s adventures in our news archives and on our Facebook page.

Ike and Val Woods :: THE PARTY’S JUMPIN’ Selwyn Birchwood is ready for his breakout close-up