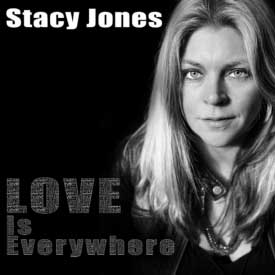 When you think of the Pacific Northwest music scene, you obviously think of the “grunge” movement of Seattle or the indie rock coming out of Portland, but nestled quaintly in a corner of the Evergreen state is a happening blues scene.

One of the front runners of that blues scene is the firecracker known as Stacy Jones. With a voice as strong as Janis Joplin and a backing band as solid as John Mayall’s Bluesbreakers, Stacy Jones (vocals, harmonica, piano, guitar) and the boys — Tom Jones (bass), Rick J. Bowen (drums, vocals), and Jeff Menteer (guitars, vocals) have been described as “a whiskey and water baptism.”

The growth of this multi-award-winning band from album to album is immeasurable. On their seventh album, Love Is Everywhere, Jones and the band spread their wings further than they have ever before. Recorded live at Studio Litho in Seattle with producer/engineer Floyd Reitsma (Pearl Jam, Dave Matthews), Love Is Everywhere, the bands seventh album. is rich in texture (“I’ll Be On My Way”), brazen in the blues (“Mojo Potion #61/49”) and flirts with rockabilly (“One Stoplight”) and Americana (“Tough Girls Never Cry”).

What ties Love Is Everywhere together is Jones integrity. She’s never really been shy in her lyric writing, but some of these songs just plunge the knife in you and twist. Not only does Jones sound empowered as a female blues singer, but she struggles with the idea of finding and losing love on the cuts “I Fell In Love” and “Can’t You Be Mine.” She pays homage to a friend who died in a house fire in the heart wrenching “Wait For Heaven” and the title track was written as a response to the horrible attack on the Pulse Nightclub in Orlando, Florida.

Stacy Jones is a force to be reckoned with, a real powerhouse who wrote 10 of the 11 songs, in addition to playing harmonica, acoustic, electric guitars, piano, and Hammond B3 along with lead vocals. ‘Love Is Everywhere’ is a brilliant and compelling blues album which should take Jones and company to a higher level. – Troy Michael, Innocent Words