Starting Thurs May 11- Sun May 14 lots to discover at Gator By the Bay in San Diego, CA 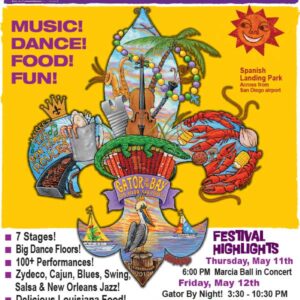 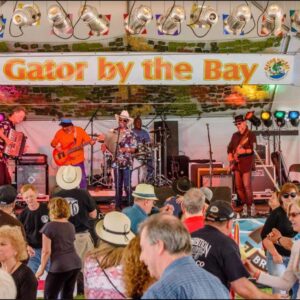 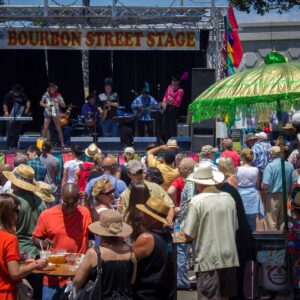 (San Diego, CA) – You might think that Gator By the Bay, San Diego’s largest good times music festival, is all about Cajun and Zydeco music, but you would only be partially right. Sure, there is plenty of top notch straight-from-Louisiana bayou music, but in recent years, the 16-year-old festival has grown to also showcase legendary Blues artists, along with rockabilly, roots, salsa and Latin music. In fact, the official name of the event is now Gator By the Bay Zydeco, Blues, and Crawfish Festival. Of the 100+ musical performances happening on seven stages throughout the May 11-14 festival, at least 30 fall squarely in the Blues category, with a number of others mixing the Blues in with other genres.

The festival will kick-off with a concert headlined by Grammy nominated boogie-woogie blues singer and pianist, Marcia Ball, on Thursday, May 11. Texas-born and Louisiana-raised, Ball ignites a full-scale roadhouse rhythm and blues party every time she strolls on stage. Her groove-laden New Orleans R&B and driving Gulf Coast swamp pop/blues, filled with flavors of Tex-Mex, Zydeco and boogie-woogie, have garnered her five Grammy nominations, six Living Blues nominations, nine Blues Music Awards (and a phenomenal 42 nominations), a place in the Gulf Coast Music Hall of Fame, and devoted fans all over the world. In 2015, she was named the Pinetop Perkins Piano Player of the Year at the Blues Music Awards.

Other Blues artists appearing May 12-14 include a variety of internationally known and local standouts.

Lil’ Ed & The Blues Imperials, reigning champs of the raucous, slide-stoked Chicago sound, have spent over 30 years cranking out high-octane blues on a series of critically acclaimed albums and in thousands of live performances.

Kenny Neal is a modern swamp-blues multi-instrumentalist, who draws inspiration from the sizzling sounds of his native Louisiana. Since 1989, he’s won two dozen prestigious awards, including several Grammy nominations, and was inducted into the Louisiana Music Hall of Fame in 2011.

Appearing together are Johnny Vernazza and Carlos Reyes. Multiple gold recording artist Johnny V’s blues and slide guitar history includes playing with such legends as Luther Tucker, Sunnyland Slim and Elvin Bishop. Born in Paraguay but a long-time San Francisco Bay Area resident, Carlos Reyes is a master of both the violin and the complicated 36 string native Paraguayan harp, whose music he has taken to new and ground breaking levels.

Also combining their prodigious talents together are Jon Atkinson, Darrell Nulisch, and Kid Ramos. “Big Jon” Atkinson consistently blows away audiences with his smokin’ harmonica and guitar playing, as well as attention-grabbing vocals. Darrell Nulisch was a founding member of Anson Funderburgh and the Rockets before going solo and releasing albums that showcased his incredible blues-harmonica skills and his passionate voice. Most recently, Nulisch has traveled as guest vocalist with the late Grammy-winning Chicago blues harmonica legend James Cotton. Fabulous Thunderbirds alumni Kid Ramos is a much sought after guitarist, singer and songwriter, whose bio also includes work with James Harman, Room Full of Blues, The Mannish Boys and Los Fabulocos.

Ben Rice’s award-winning vocals and guitar playing draws inspiration from the greats who came before, from B.B. King to Marshall Tucker. At the 2014 International Blues Challenge in Memphis, TN, he was awarded the St. Blues Guitarist award for best guitarist in the solo/duo category.

Along with several accomplished local Cajun and zydeco bands, the music lineup stars three of Louisiana’s most popular groups, each of whom will play all three days, Friday-Sunday.

Geno Delafose & French Rockin’ Boogie are one of the most popular zydeco dance bands around. These Grammy-nominated pioneers of the “Nouveau Zydeco” genre play music deeply rooted in traditional Louisiana Creole sound, with strong Cajun influences and total danceability.

Four times Grammy-nominated Steve Riley and the Mamou Playboys have brought their stunningly clean and cohesive performance of Cajun French music from the prairies and bayous of Southwest Louisiana to stages all over the world for the last 27 years. Moving effortlessly between traditional Cajun songs to their own original contemporary compositions, the band is known for their stunning vocal harmonies, sophisticated musicianship, and giving their audiences a damn good time.

Rockabilly, country, Latin, and roots music will be well represented in the schedule as well.

And then there are the 10,000 lbs of crawfish, direct from Louisiana, just begging to be eaten, all the yumminess at the French Quarter Food Court, large wooden dancefloors at five stages, free dance lessons and cooking demos, kids’ activity area, and lots, lots more.

Schedule, tickets, and all info are found at GatorBytheBay.com. Kids 17 and under are admitted free with paid adult ticket, and active military with proper ID are also admitted free on Friday, Saturday, and Sunday.