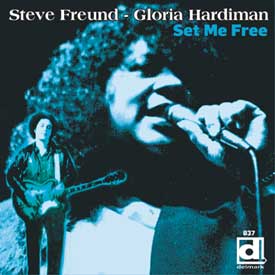 Delmark released a buried treasure from the 80’s from Chicago label, Razor Records. Set Me Free is a rare collector’s item LP that features the standout vocals of Gloria Hardiman, killer guitar work from Steve Freund and stellar keys from Ken Saydak, all of their debut recordings. This never-before-on-CD recording features outstanding support from an all-star Chicago band, including living legend bassist, Bob Stroger, as well as the ever reliable bassist Harlan Terson, swingin’ sax from Sam Burckhardt, and the late, great Sunnyland Slim performing on three cuts. At the time, the results were so satisfying that they formed a band called The Blueprints and Stroger, Freund and Burckhardt were also Sunnyland’s longtime, popular last working band.

Born and raised in Brooklyn, blues guitarist Steve Freund was reborn a Chicagoan when he relocated in 1976.  The list of people he’s played with reads like a Who’s Who of Chicago blues legends including Sunnyland Slim, Luther Allison, Lonnie Brooks, Otis Rush, Koko Taylor, Johnny Littlejohn and Big Walter Horton. Originally issued on the Razor label this 1983 album was Steve’s debut as leader. It teams him up with vocalist Gloria Hardiman whose voice was one of the richest, toughest blues voices on the Chicago scene at that time… a voice that’ll steal your soul and take it right up to heaven. Set Me Free contains four bonus tracks including the previously unissued “Homework” and “Kiddio” and two by Ken Saydak, keyboardist for the whole album, from a rare ’83 Razor single.