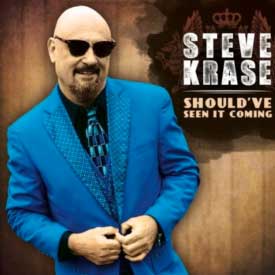 Steve Krase is well-known as the harmonica player behind Trudy Lynn’s three incredible blues albums on Connor Ray Music. To those in the know, Krase is a powerhouse in his own right as a performer, whose high energy shows are legendary around the Houston scene. Krase has been recognized in multiple categories over the years by the esteemed Houston Press Music Awards in several categories, and most recently -and perhaps most suitably – in 2016 as “Best Player.” Steve was also a semi-finalist at the recent 2017 International Blues Challenge in Memphis.

Should’ve Seen It Coming is Krase’s 4th for Connor Ray Music and follows his acclaimed 2014 release, Buckle Up. It includes five original tunes by Steve and his cohorts, including his brother David, bassist and co-producer Rock Romano and the late Jerry Lightfoot, who was an early mentor to Steve. Originally from Brooklyn, New York, Krase spent 10 years with Lightfoot’s “Essential Band” providing harmonica on three of Lightfoot’s releases.

“As always I try to make a fun record that people want to turn up loud at a party or crank it on the car radio on a long road trip,” Krase says. “I was honored to be able to include great Connor Ray Music artists Trudy Lynn, Mark May and Bob Lanza on this CD.”

Among the unique covers on Should’ve Seen It Coming are Steve’s takes on music from Willie Dixon “(Crazy for My Baby”), Fats Domino (“Let the Four Winds Blow”), and Clarence “Frogman” Henry (“Troubles, Troubles”).

“The majority of this CD was recorded live over two nights at the Red Shack in Houston,” states Krase. “I was lucky enough to be able to include a couple of my Connor Ray Music label mates on this release, Trudy Lynn, Mark May and Bob Lanza.” \

Steve Krase expands on the song list for Should’ve Seen It Coming: “‘Brand New Thang’ is a groovy song written by ‘Dr. Rockit’ Rock Romano that Mark May just owns on guitar! On ‘Crazy for my Baby,’ we loved Charlie Musselwhite’s interpretation and decided to add elements of the Little Walter and Willie Dixon versions to it. For ‘Let the Four Winds Blow’ – I’ve always loved Fats Domino, it was a just matter of deciding which song. ‘The World’s Still in a Tangle’ is a takeoff of the Jimmie Rogers original – the message being turn off the news!! ‘Shot of Rhythm and Blues’ is a Rock Romano favorite that I was lucky enough to catch Bob Lanza while he was in town to add the killer guitar leads. Wee Willie Waynes’ ‘Travelin’ Mood’ is an oldie but goodie. ‘Troubles Troubles’ is a great tune by Clarence ‘Frogman’ Henry that Randy and I just rock out on. ‘Make You Love Me Baby’ was a staple of Jerry Lightfoot’s live performances, ‘Foots’ taught me everything I know about this music and I try to pay tribute when I can, including here, which is also a nod to another inspiration, James Cotton. The Junior Parker version of ‘Way Back Home’ was introduced to me by my dear fiend Trudy Lynn, who sings background vocals on three of the album’s tracks. She wanted me to play something mellow… sorry, Trudy! ’Should’ve Seen It Coming’ and ‘Repo Man’ are another couple of songs from my brother David representing fictional crazy characters. I like to think of ‘Repo Man’ as a blues song for 2017, as ‘Back Door Man’ is no longer the biggest badass on the block! The two bonus tracks included on the disc are explicit versions of the title track and ‘Repo Man’.”

“Steve Krase’s music is no holds barred and his songs are meant to be listened to loud.” – Blues Blast Magazine

Starting Thurs May 11- Sun May 14 lots to discover at Gator By the Bay in San Diego, CA Celebrate Mississippi's Bicentennial with "Monday Movie Nights" at Delta Blues Museum starting May 22