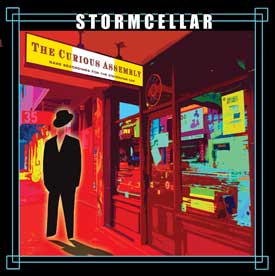 Powerhouse songwriting, blues/roots outfit Stormcellar, have released their 6th Album, The Curious Assembly to debut at #2 and climbing on the Australian Blues & Roots Chart. With two previous #1 slots in the land downunder and albums charting in the US, France and Canada, Stormcellar have continued to release original interpretations of 20th century styles described as ‘Weird…but good!’

It’s Blues, but not as you know it.

But what else would you expect from band built on the bones of a straight forward slide/harmonica, R&B five piece that’s mutated uncontrollably to mix blues with Reggae, Japanese pop and Australian convict songs.

Described as, “The Rolling Stones fronted by James Taylor” by No Depression, Stormcellars new album, The Curious Assembly was recorded at 12 different studios across the greater Sydney basin, matching each tracks’ style to a producer and studio.

Accompanied by a 36 page instructional catalogue, Adventures with my Mouth Organ, The Curious Assembly is a tour de force of no holds barred mixing of styles and concepts, from ballad to boogie and back again; Inappropriate use of harmonica, mandolin, twin guitars, lyrics that woke up this morning and then got on a Greyhound bus and went to a Frank Zappa concert whilst reading Zippy, drinking Sterno and listening to Canned Heat.

Creative, original, endlessly inventive and with the easy assurance of a band with 6 albums, two International tours and hundreds of live shows, The Curious Assembly is by far the most expensive thing they’ve done, and one heck of an album besides. Clear your mind, cleanse your musical palette with something old, something new, something familiar yet something… curious.