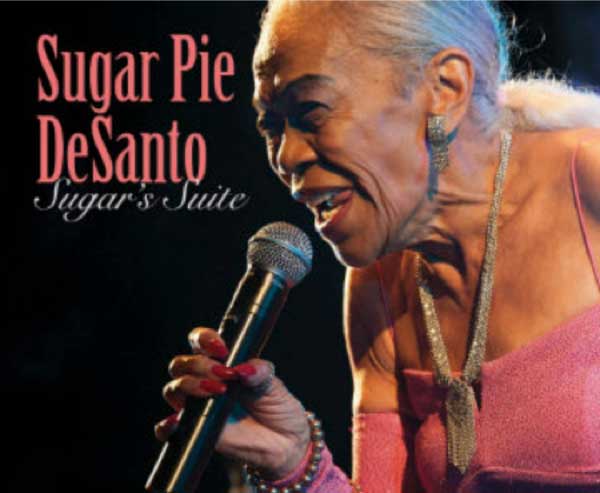 Make Time For the Grieving

a piece of music with several parts, usually all in the same key

The illustrious and over-qualified Sugar Pie DeSanto has done it again. In this, her 83rd year of traversing earth in song and composition, Jasman Records has released a four track EP cd of new material from The Queen of the West Coast Blues. An additional collector’s item is a 7” 33 1/3 vinyl picture disc with two of the four tracks represented. The songs are written by Ms. DeSanto and James Moore, Sr. The music production was supervised by three time Emmy Awardee Bill Jolly. The liner notes are written by celebrated music journalist, Lee Hildebrand. The cover and packaging was designed by guitarist and bandleader Anthony Paule.

Ms. DeSanto has been a bridge between the “down” Bay Area Sound and the gritty urban Chicago Blues and R&B, since the Chess Brother signed her to a fairly lucrative contract as a singer songwriter in early 1960s. Along the way, she shattered the glass ceiling for female performers at least twice; as the first female opening act for Godfather of Soul James Brown and also as the only female performer on the 1964 American Folk Blues Festival Tour of Europe which featured Blues stalwarts such as Howlin’ Wolf, Muddy Waters, Lightnin’ Hopkins and Willie Dixon. With her hot and frantic stage presence, she in no small way pushed James Brown’s performance level up a notch as he became the hardest working man in show business.

The Chess Brothers shelved much of her recorded material back in the ‘60s when it was recorded. However, when Kent Records of the UK released Go Go Power; The Complete Chess Singles of Sugar Pie DeSanto 1961-66 in 2009, it debuted at number 15 on the Billboard Blues Chart. It had been 43 years since she had charted!

In 2013, Queen Sugar was feted in Norway at the Hell Blues Festival as its Artist of the Year. She was presented the award in front of 1.5 million people on Norwegian television. She then burned the house down with her performance.

She was featured on the cover of the August 23, 2018 issue of Blues Blast Magazine as the subject of an interview by Bill Dahl. Additionally, at the Blues Blast Magazine Music Awards, held in Rockford, Illinois on September 29, 2018, Ms. DeSanto was presented with a Lifetime Achievement Award.

Sugar Pie DeSanto’s feats of strength in the music business are fabulously described by many of her peers including Maurice White of Earth, Wind & Fire and Etta James. Chess Records A&R man Billy Davis declared that Sugar Pie could out-perform Etta. Chicago music maestro Willie Henderson has profound respect and reverence for the Sugar. Recently, Rock & Roll Hall of Famer Mark Naftalin proclaimed on his radio show while reviewing Sugar’s Suite that not only was she a vivacious & sweet performer but a good songwriter too, with over 100 songs to her credit.