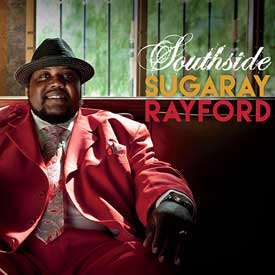 Southside consists of all original songs written by Rayford and his writing partner, Ralph Carter. The CD has a Memphis Stax feel to it and its original, soulful contents highlight Suga’s current perspective of the blues. Gino Matteo’s guitar is as eclectic as the guitarist himself. The band is tight and the grooves are intoxicating.

Sugaray was nominated for BB King Entertainer of the Year and Traditional Male Vocalist for the 2015 Blues Music Awards. He is also lead vocalist for The Mannish Boys who were also nominated for 3 awards.