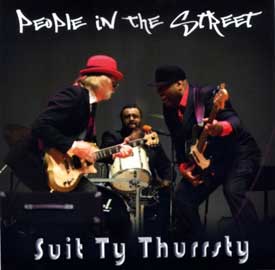 As eclectic and original as their name, singer/songwriter/guitarist Tom “The Suit” Forst, singer/ bassist Tyree “Ty” Pope and singer/percussionist Pedro “ Bigg Thurrsty” Johnson come busting out of the Northeast with a heady mix of rock, blues, funk, soul and hip hop. They proudly and powerfully proclaim their love and mastery of a range of musical styles often combined with cutting social commentary on their knockout, new release, People In The Street.

On the heavy grooving R&B of “I’m Never Gonna Leave You,” Johnson sings some startling lyrics while Forst rips off staggering, bluesy, jazzy solos. Track two is the grinding, funky “Diamonds” with Johnson warning to not trust your heart to a thief. The clanging, rocking, hip hop title track has Johnson and Pope accusing in a blistering, bi-partisan indictment. “Same Old Song” is a raunchy, low down boogie blues with Forst he strangling his strings. The hot riffing shuffle “Darkest Before Dawn” finds Forst intoning haunting lyrics and his guitar barking fat, overdriven lines. Poking good-natured fun at contemporary blues lyrics, “I Got the Blues” runs down the middle class reasons not to have the blues. Next, is the Pope and Johnson duet-heated rap vocals on the pop/hip hop/gospel/field holler mash up, “You Make Me Real.” In direct contrast, “Drawers” flirts with heavy metal and lusty soloing. “Mama (What’s a Man?)”  is a brooding, minor key ballad. The dramatic and dynamic heavy rap/rock of “I’m Already Against the Next War” has all three singers furiously driving home a message. The searing rap/funk/ blues, “I See Your Future”, is intensified by Forst’s scalding solo. A reprise of “Same Old Song” utilizing a different, funky dance groove, closes the set.

The musical dynamo of Forst, Pope and Johnson plumb uncommon territory with emotional depth rare in contemporary music, no matter the genres. Their passion remains in the heart long after they have rocked the house down.