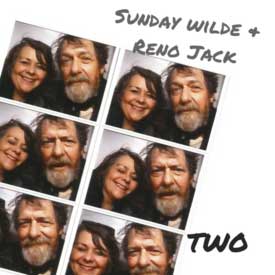 “Mastered by GRAMMY® winner Peter J. Moore (Bob Dylan The Basement Tapes), TWO is a raw, deliberately simple recording. No overdubs or fancy studio wizardry. Just real instruments played by real musicians. As soon as we hit play, “Howling For My Darling” graced our ears. The jolt of hearing a Howlin’ Wolf tune done in a female voice vanished in just a few bars. Wilde torched it up nicely with enough of a growl in her voice to make it legit. Singing it from a female point of view, she also added a verse so there is no mistake. Ah, ah, ah ooh-wee!”

TWO consists of 10 songs mostly covers of Ruth Brown, Howling Wolf, Patsy Cline, and one tune by Sunday’s father called Van Horne.  Available at most online retailers. TWO is already spinning worldwide on roots and blues radio programs. If you like the music request it.

All the musicians involved; Wilde (piano, vocals), Jack (bass, vocals), Cleave Anderson (drums), Steve Koch (guitar), and John MacLeod (guitar, harmonica) have known one another, and played together for ten years or more. It’s no surprise then to learn the entire project was recorded in just eight hours, with mostly first takes. It was co-produced by Reno Jack and John Borra, with Borra also doing the recording and mixing.

Over the past decade Reno and Sunday have released 8 albums, garnered awards and various nominations including: Best Blues and Roots Release of the year on Blues411, Voters Choice Best Blues Song of Year on the Independent Music Awards (2x), Finalist in the International Song writing Contest and much more. All of their releases have had worldwide roots and blues radio play including #3 in Mexico and #1 at Vasser College (Blues Charts), Hit the Living Blues Report and some have remained on the roots music report charts for months. As a duo they have done a number of tours the past few years.