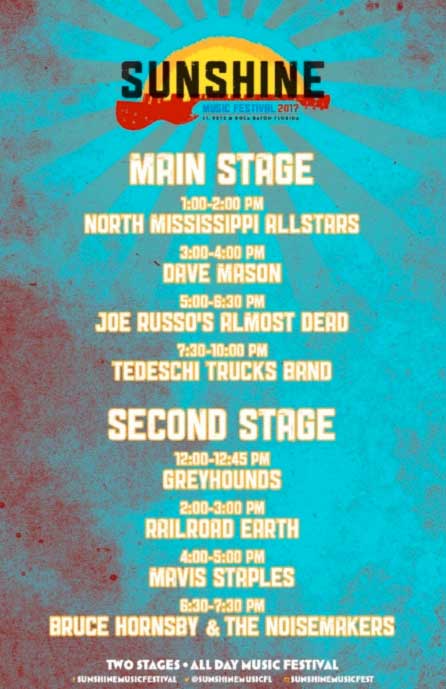 When it’s January in Florida that means it’s time for the annual Sunshine Music Festival to bring some of the most electrifying musical performers to the state. And this year promises to be one of the best yet!

Once again headlined by the preeminent blues-rock leader Tedeschi Trucks Band the 2017 Sunshine Music Festival features a great line-up of exciting acts on two live music stages along with a wider array of refreshing craft beers and delectable menus from a wider variety of food vendors. The Festival will kick off Saturday, January 14, 2017, at Noon in Vinoy Park, St. Petersburg in the Tampa Bay Area and then Sunday, January 15, 2017, at Noon in Mizner Park Amphitheater, Boca Raton in South Florida.

General Admission tickets for the all-day event are $59.95. Special Reserved Tickets are available for $99.95 and limited VIP Sunshine Experience packages are also available. All dates, acts and ticket prices are subject to change without notice. All tickets are subject to applicable taxes, parking and service and handling charges.

Tedeschi Trucks Band, or TTB as their fans prefer to call them, are returning to what has become their signature live musical event. Formed in 2010 with a spirit of adventure that inspired Susan Tedeschi and Derek Trucks to shelve their equally successful solo careers, Tedeschi Trucks Band, a 12-piece tour-de-force, has quickly become the vanguard of modern roots music. Hailed as “a deeply skilled groove machine (Los Angeles Times) that “booms like a soul thunderclap” (Boston Herald), the band has cemented their reputation for thrilling audiences worldwide with its legendary live performances, original songwriting and award-winning albums. In just six years, TTB has toured extensively worldwide with top-bill performances at The New Orleans Jazz and Heritage Festival, Bonnaroo and the venerable Newport Jazz Festival. Driven by Trucks, #16 of the top 100 Guitarists of All Time (Rolling Stone), and Tedeschi’s impassioned, blues-soaked vocals, the Jacksonville-based group earned a Grammy for its debut Revelator, followed with a dynamic live double disc, Everybody’s Talkin’, and 2013’s acclaimed Made Up Mind. In 2016, TTB released their highly anticipated third studio album, Let Me Get By.

“Not only does this quintet play tight and vicious versions of some of the most complex songs in the Grateful Dead’s repertoire, but they play them with a rawness & energy absent from the stage since the ‘Live’ Dead era.” Scott Bernstein, Jambase 9.12.13; One of the most diverse, collaborative and adventurous in contemporary music, Bruce Hornsby & The Noisemakers; Mavis Staples, the alchemist of American music in her seventh decade and only gaining momentum; English singer-songwriter and Rock and Roll Hall of Fame inductee Dave Mason; Railroad Earth, roots and Americana-based newgrass jam band from Stillwater, New Jersey known for their extensive live improvisation and lyrical songwriting within an acoustic base; North Mississippi Allstars, American southern rock/blues band and sons of Memphis legend Jim Dickinson; and Greyhounds, American musical duo who wrote songs performed by Susan Tedeschi and Derek Trucks.

With More Great Music, More Great Craft Beers and More Great Food, the 2017 Sunshine Music Festival headlined by the Tedeschi Trucks Band comes only to Florida for two dates this year, Saturday, January 14 at Vinoy Park, St. Petersburg in the Tampa Bay Area; and Sunday, January 15 at Mizner Park Amphitheater, Boca Raton in South Florida. Tickets are on sale now at www.livenation.com, all TicketMaster outlets or charge-by-phone at 1-800-745-3000.