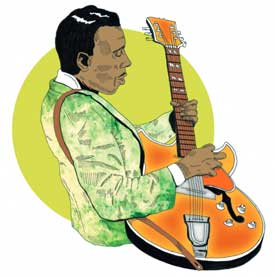 There’s little doubt that your basic blues fan looks to the music for its raw, rough-hewed quality. Lyrically, it should shout, growl or moan about the lack of money when the rent is due, a wicked need for whiskey when your woman has made herself abundantly absent, or loneliness so bad there’s no real word for it. The same goes for the music. It should be three chords, a few fancy licks, no unnecessary decorations. It should be the aural equivalent of a Hemingway short story.

Bringing with him the single-string lead playing and voicings of jazz guitarists like Charlie Christian, Walker is the cat who brought sophistication to the blues, without sacrificing its basic story: my money’s gone, my girl’s gone, my hope’s gone. Often in the same song.

We can certainly thank The Allman Brothers for reviving the jazz-influenced blues that T-Bone Walker introduced in the late 1940s. The Brothers’ faithful version of Walker’s most famous tune, “Stormy Monday,” is as bluesy in feeling as you can get. But it subtly breaks all kinds of rules that early blues players had seemingly carved in stone. Lyrically, yeah, it’s pained. But it’s more abstract than the prototypical paeans to hard-times listeners had come to expect from the form. It’s about how damn daunting the week looks on Monday. And it throws in a line often used in African-American culture – “The eagle flies on Friday” – that would soon be standard speech for all kinds of folks, fancy and plain. Just as importantly, it also introduced, or, at least popularized, something that previous bluesmen had not shown much interest in: it used more than three damn chords.

If you play the song in the key of G, you’ll see how subtly, smoothly, Walker folded in the C9, the Am7, Bm7 and other chords, often associated with the sort of standards that jazz cats were throwing down. History is uh, muddy, about who first shook up the 3 Chord/12 Bar blues. But T-Bone is near the head of the line.

Want to see how modern and cool Texas-born Walker still seems? Dig “Don’t Throw Your Love On Me Strong.” It has a laid-back jazzy feel. As slow-paced as it is, it still swings. Yet, with those sliding licks, Maj 6 chords and that cool, unforced voice, the mood of the tune is equally elegant and still blue, like a distressed pair of jeans you just bought for $200.

As superb a songwriter, singer and stylist as Walker was, we must also discuss that guitar playing. At a time when jazz players were still figuring out how much and how long to solo, this unashamedly bluesy player was picking smart, cleanly-articulated lead lines that influenced generations of players to come. It’s hard to imagine a B.B. King, really, without T-Bone. B.B., despite his singular stinging tone, found his own voice on the guitar. But it’s hard not to hear the restraint and taste, that one-note-that-breaks-your-heart that King perfected, without T-Bone doing it first. King makes no secret about how hearing “Stormy Monday” was the epiphany in his guitar-playing life.

History also records that rock star Steve Miller took lessons from Walker.  And in Taylor Hackford’s Chuck Berry documentary, Chuck also cites T-Bone as an influence. As did a fella named Jimi Hendrix, who, no matter how multicolored he may have turned them, always kept something blue in his convoluted runs and spoke highly of Walker. Oh yeah, Jimi picked up the idea of playing with his teeth from T-Bone, too.

So the next time a non-believer, full of useless information, says all blues sounds the same, sit him down and school him. Put on “Stormy Monday.” And after explaining that Gregg Allman didn’t write it, tell this guy that T- Bone Walker was a man with vision. He had his blues basics down. He said, “What if we added this chord here? Or that sliding riff there? What if the song was a little more subtle, musically, lyrically, without losing the feel, the deep pain, cold rain and hard times of the blues? What if we did that?”

That’s what T-Bone Walker did. And his ideas are still being felt, still flying, and shall be as long as people are flush on Friday and broke come Monday.

This article appears in the May/June 2015 “Blues Issue,” now available on newsstands.