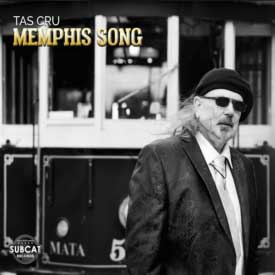 Memphis Song completes a trifecta of Tas Cru’s creativity that began with his breakout effort, You Keep the Money (2014) and followed by the 2018 Blues Music Award nominated – Simmered & Stewed. Released on the newly reestablished and refreshed Subcat Records (Syracuse, NY), Memphis Song showcases Cru’s talents as an acclaimed songwriter, guitarist and vocalist.

For Tas it’s always about writing good lyrics, earning him high praise for his songwriting. It is said that his songs are blues poetry, songs crafted with rare verbal flair and that his ability to cast a memorable hook is magical. The songs on Memphis Song proudly aspire to this measure and testify to Tas Cru’s reputation as one of the most unique of bluesmen plying his trade today.

This album is dedicated to those musicians, like him, who found their muse in Memphis – musicians who have been uplifted and inspired by its spirit and when listening to their songs one senses Memphis whispering in your ear. On the title track, Cru calls out to his muse and Memphis answers, “ I hear ya’ callin’ you been too long gone. Come on home and sing your Memphis song.” Featured here on this cut are performances by four-time Pinetop Perkins award winning, Victor Wainwright delivering a sizzling solo and his guitarist, Pat Harrington, adding his trademark, soulful slide work. The song’s co-author, Mary Ann Casale, provides a very tasty, finger- picking style acoustic guitar to give the song its authentic vibe.

Memphis Song is a dozen original songs that touch on nearly every roots music genre starting off with the gospel-tinged, “Heal My Soul,” a raucous, song of inspiration that brings the album to life. There are several upbeat, fun-loving tunes include “Fool for the Blues,” “Have a Drink,” the slightly irreverent “That Look,” “Feel So Good,” and the album’s closer “Can’t Get Over Blues.” The songs, “One Eyed Jack,” “Don’t Lie to the Woman,” and “Give a Little Up” are all prime examples of why Cru has earned his reputation as a master at crafting thoughtful and entertaining lyrics.

Memphis – no place means more to blues musicians, past and present. And to no one does Memphis mean more than it does to Tas Cru. It’s no wonder Tas has been inspired to name his album, Memphis Song to play homage to the city that means so much to him and his music. Tas is a frequent visitor to Memphis where regularly he is seen performing on Beale Street at least a couple times each year. He hosts the annual (10 years running) opening International Blues Challenge Jam at the world-famous Rum Boogie Café and performs at various venues and events during the IBC and during the Blues Music Awards. Tas is honored to have been awarded a guitar to autograph that now hangs directly above the stage at the Rum Boogie alongside others autographed by legendary performers who have graced the club.

Memphis Song is available from the usual online outlets – iTunes, Amazon Music and CDBaby – or even better, get it when you catch Tas Cru live at one of your favorite festivals or venues. Visit his website for more information.