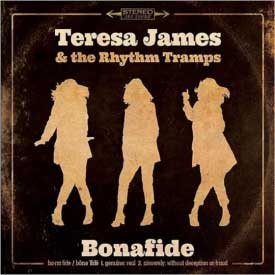 Following her 2008 Blues Foundation nomination for Contemporary Blues Female Artist, and two subsequent Independent Music Awards, Teresa James’ new album – her ninth – features a depth of performance and material that covers a wide range of musical territory and emotions. From the swampy rawness of the title cut to the urban strut of “Hollywood Way,” Bonafide has something for everyone. Besides a bevy of well-conceived original songs, the band throws in a couple of cover tunes: “I Like It Like That,” the great oldie by the “5” Royales, and James’ much requested version of John Hiatt’s “Have A Little Faith.” With performances by some of Los Angeles’ top musicians, the album lives up to its name.

Originally from Houston, Teresa James and her band The Rhythm Tramps have been working in the L.A. area and at blues festivals and clubs throughout the U.S. and Europe for many years. For the past 12 years, the group has been a favorite on Delbert McClinton’s Sandy Beaches Blues Cruise. James’ 2012 album Come On Home was listed on many “best of” lists that year and received rave reviews. She has performed live with such legendary artists as Levon Helm, Delbert McClinton, Eric Burdon, Marcia Ball and Tommy Castro, and her voice has been featured on albums by Randy Newman, Eric Burdon, Bill Medley and Walter Trout, among others. She has also sung for television and movie soundtracks, including Disney’s Holes.

“I haven’t heard pipes of this quality in a long time – this lady has ‘star’ written all over her!”

“This is the stuff they don’t teach you in school … so even if there are few places left to learn the lessons needed to make this music anymore, be glad there are people like Teresa James & the Rhythm Tramps to do it.” – Bill Bennett, Sonic Boomers

“Teresa James is a true original. When she sings, you can feel it in your bones.” – Levon Helm

Hope, Heroes & The Blues via Blues in The School conductor Tj Wheeler The Big Blues Bender Does It Again