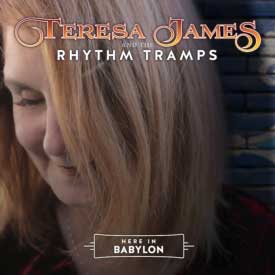 A native of Houston Texas, singer songwriter and roadhouse piano player, Teresa James has been based in Los Angeles since the 90’s, where she has assembled a group of some of the top L.A based touring and session musicians into her band, The Rhythm Tramps. James, whose style draws instant comparisons to Bonnie Raitt and Lou Ann Barton, is a unique figure in the blues and roots world as soprano whose voice is equal parts sweet and salty with just a sprinkle of southern twang and plenty of full-throated range.

Her tenth album Here In Babylon is the first one that she and the Tramps tracked ‘live’ in the studio. James was joined by her longtime partner, Terry Wilson, on bass and Billy Watts on guitars along with drummer Jay Bellerose to record all the songs in two days of tracking. Bellerose is well known for his work in the rhythm section for producer T Bone Burnett and joins the Tramps for the first time to add his imaginative style of drumming and take the group in a slightly new direction. The twelve original tracks of roots, blues and soul keep the focus on James and her vocal skills backed by just the right amount of instrumental flair.

The deep blues eyed soul groove “I Know I Ain’t Been So Perfect,” opens the set with Mike Finnegan on the B3 organ sparing with James on the Wurlitzer. The rolling bomber vintage drums of Bellerose and greasy slide from Watts propel the swampy funk and subtle political jabs of the title track “Here In Babylon.” The horns section of Joe Sublett and Darrell Leonard join the slinky second for the NOLA inspired “Give Me A Holler,” and the straight-ahead Memphis R&B styled “Head Up, Heart Open.” James gets wistful on the sensuous lover’s lament ‘I Keep Drifting Away,’ with its luscious Burt Bacharach-esque chorus. She then takes us to the Crossroads for a retelling of the infamous deal between Robert Johnson and the Devil at “Ground Zero,” imbibing the oft told tale with a few new twists and turns. More sweet Hammond B3 spice is added to the tasty Motown love song “Hold On,” and the band swings while Leonard’s trumpet wails on the West Coast cool of “You Had To Bring That Up.”

James delivers a heartfelt tribute to Greg Allman on the emotional “The Day The Blues Came To Call,” explaining her love for the fallen hero. The crew flips the mood on its ear with some real Texas Honky Tonk on the rowdy “I Gotta Roll,” with the horns joining the party once again. James then takes us to church on the Gospel Rocker “21st Century Man,” leading the choir in a timely plea for peace and for everyone to “believe in the freedom of a rock and roll beat.” Bellerose then rolls out a classic Bo Diddley beat on the tom toms for the rabble-rousing album closer “Find Me A Bar,” a celebration of good times with good friends in a place where everybody knows your name.