Terry Hanck :: GOTTA BRING IT ON HOME TO YOU 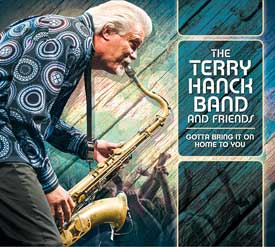 Terry has never lost his unbridled enthusiasm and fearless youth — in his playing, songwriting or his personality. He has traveled from his hometown of Chicago to Southern California tot he Bay Area and finally to the south coast of Florida; from the 1960s Berkeley-based Grayson Street Houserockers to ten years with the great Elvin Bishop. He has lead his own band for over 25 years. In 2014, with his great tone (sax AND voice!), classic songwriting and a few choice covers, he brings it — and brings it on home for Delta Groove one more time.