The B.B. King Auction of a thousand treasures 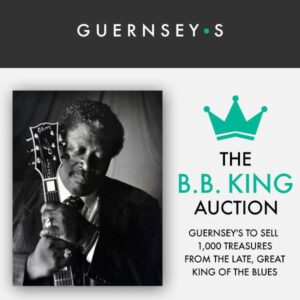 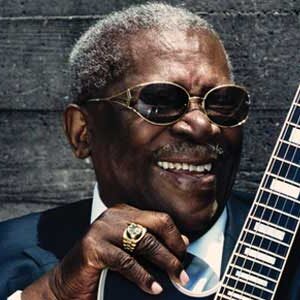 For millions upon millions of devoted fans, the globe seemed to pause for a moment when, in 2015, the wonderful Riley B. King – better known simply as “B.B.” – passed away. Now, slightly more than a year later and as soon as Court approval is given, Guernsey’s will be conducting a totally unreserved Auction of a thousand of the Blues great’s most treasured possessions. A public Preview will be taking place live at the New York City showrooms of Gibson, the guitar maker which created B.B’s beloved instruments. (The Gibson facilities on West 54th Street were once home to The Hit Factory where many iconic songs from the likes of John Lennon, the Rolling Stones, the Talking Heads, Bruce Springsteen, Michael Jackson and U2 were recorded.) Shortly after the Preview exhibition, the Auction will be conducted online. Proceeds from the sale will be going to the B.B. King Trust.

Perhaps the most famous name in the history of guitars is “Lucille”, the name B.B. affectionately gave to the several instruments he played over the decades. Stemming from a tragic incident at one of his earliest performances, Lucille came to be synonymous with the Blues and will forever be linked to the one and only B.B. King. With the first Lucille believed destroyed more than half a century ago, the only Lucilles ever to be sold will be the three in this auction. Two of them are black-bodied instruments (one of which Gibson stamped “prototype”), with the other being blond. (B.B.’s fans were so accustomed to seeing a black Lucille that they were a little less receptive when the Blues legend played the blond-colored instrument on stage.) The thirty other guitars in the collection reflect the diverse interests of Mr. King as he played and collected instruments from the most sophisticated down to the charmingly hand-crafted (such as his several “cigar box” guitars).

That B.B. retained the things that were important to him through the years is an understatement and indeed, this auction will contain most of them. He had, for example, roughly one hundred (!) custom “stage jackets” beautifully made for him in Hong Kong. Resembling Tuxedo jackets – but created in vivid, often wild colors and patterns – they capture the essence of the man as he appeared during his performances. But these stunning jackets represent only a portion of the list of personal items to be sold including other attire, membership cards (the Blues Foundation, SAG, etc.), overflowing passports and jewelry including his fabulous “BB” diamond ring seen so often in close-up photos of the great man. As one might imagine, B.B. King received countless tributes, honors and awards throughout his long career with many coming up for sale in this event. Yes… one can bid on B.B.’s Downbeat Music Awards, the W. C. Handy Awards, his Grammy nominations, the National Medal of Arts, presentations from the White House, the Keys to many major cities in acknowledgement of “B.B. King Day” and the prison bracelets given to him by Nelson Mandela that he so treasured.

Devoted fans were known to send Mr. King all sorts of gifts including many fascinating portraits of the man. Those, as well as atmospheric photography and rare vintage posters are very much included in this event. These often appealing offerings went so far as to include “Little B.B.”, a remarkable pair of ventriloquist dummies resembling Mr. King and a female companion, “Temptation Brown.”

B.B. King, of course, was known for his music and so it would be hard to imagine his collection not containing volumes of hand-written sheet music, lyrics and guitar exercises the artist used when practicing throughout his career. Imagine opening a binder to find “The Thrill is Gone,” “Caldonia,” “Why I Sing the Blues” and “Hummingbird” musically spelled out for B.B. and his band!

Above is just a small sampling of items to be found in this once-in-a-lifetime unreserved Auction. To view the entire collection and learn the details and dates for the Preview exhibition at Gibson and the Auction, please contact Guernsey’s or visit www.guernseys.com. To get directly in on the bidding, go to liveauctioneers.com, invaluable.com or proxibid.com, the three bidding platforms where the auction is being conducted.