The Bloodline CD and Tour is coming 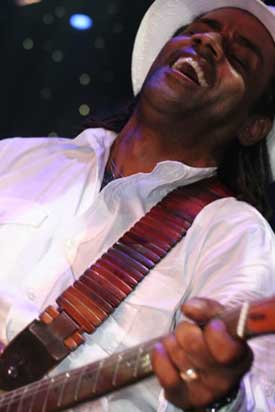 BATON ROUGE, LA – “I’m so happy to be back in the saddle again” says Kenny Neal. “I had to take off for a while for my big move back to Baton Rouge. It’s nice to be back and settled. And the best part of it all – I just completed a new CD that will be coming out soon. The name of it is Bloodline. I wrote 8 songs out of the 12. I’m really excited about it. It was fun to make, great horn arrangements, nice back-up vocals. I had my good friend Lucky Peterson come join me on piano. It was like old times. I can’t wait to get it into the hands of my wonderful fans that have been waiting for the last five years. I will serve no songs before it’s time and now is the time. So look out for Bloodline soon! I’ll follow Bloodline with a tour. Hope to see you in your town soon. You can also go to my website for more info.”

Kenny Neal is an acclaimed multi-instrumentalist, widely renowned as a modern swamp-blues master. He was born in New Orleans and raised in Baton Rouge. He began playing music at a very young age, learning the basics from his father, singer and blues harmonica player, Raful Neal. Kenny’s multi-award winning 2008 comeback album, Let Life Flow garnered many accolades including three prestigious Album of The Year awards, two Song of The Year awards for the title track, and Kenny himself garnered two Artist of the Year honors. His 2011 release, Hooked On Your Love, is a tasty musical gumbo of swamp-boogie, jazz, R&B, and straight-ahead blues, and extends the spirit of his acclaimed Let Life Flow. Hooked On Your Love was named the winner of the 2011 Critics’ Poll Living Blues Award for Best Contemporary Blues Album of the Year and the title track was named Contemporary/Traditional Blues Song of the Year by Jus’ Blues Music Foundation. In 2011, Kenny was also Inducted into the Louisiana Music Hall of Fame.

We can’t wait for Kenny’s newest CD, Bloodline, and the upcoming tour following its release.