The blues are back: Historic Hines Farm rekindles music festival 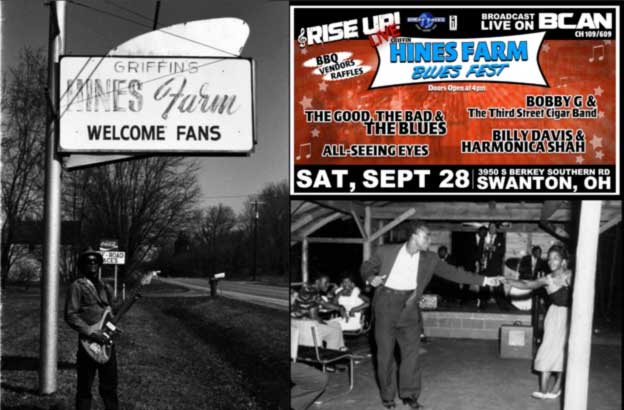 “After a decade-long absence, the blues are returning to Hines Farm this weekend,” reports Tom Henry of The Toledo Blade.

“With apologies to the killer lineup scheduled to perform at Saturday’s Rise Up Live! Griffin Hines Farm Blues Fest,” Henry continues, “it’s hard to talk about that event without doing another deep-dive into the venue’s iconic past.

After all, it’s only been sporadically open in recent years. But that’s all about to change, according to owner Steve Coleman.

Griffin Hines Farm, which for three decades was known simply as Hines Farm until the late Henry Griffin bought it in 1978, breathes history.

But it’s no ordinary concert hall, either. With its wide-open, rural setting and down-home charm, it allowed people to spread out, relax, enjoy barbecue and other types of home cooked meals, and get to know one another.

Besides music, the site — which once had as many as 40 acres — has been used for horse races, motorcycle races, ice skating, archery, Negro League exhibition baseball games, pony rides, hayrides, roller skating, and dancing under the stars. It even hosted a Jeep event a few weeks ago.

A lot has changed since it was opened to the public in the late 1940s by Frank and Sarah Hines as a music and entertainment venue at 3950 Berkey Southern Rd., aka State Rt. 295, near Swanton.

Mr. Griffin ran it for 35 years until he passed away in 2013. At that point, Mr. Coleman, one of his sons, became only the third owner. He said he sold off eight acres to settle some of his father’s affairs, and — more recently — has put a lot of sweat equity and money into getting it back into shape, including a new roof on the main building and other updates.

Still largely unknown to a lot of people, Griffin Hines Farm reopened as a local watering hole three nights a week, from Thursdays through Saturdays, earlier this year. It plans to close for the winter come the first week of December, then reopen next spring — and possibly stay open year-round, Mr. Coleman said.”